Kashmir will never be part of India: Pakistan

* Islamabad tells UN India has no other claim than that of a military occupier in Jammu and Kashmir
* India is 'mothership' of terrorism and uses it against its neighbours, own people and against Kashmiris 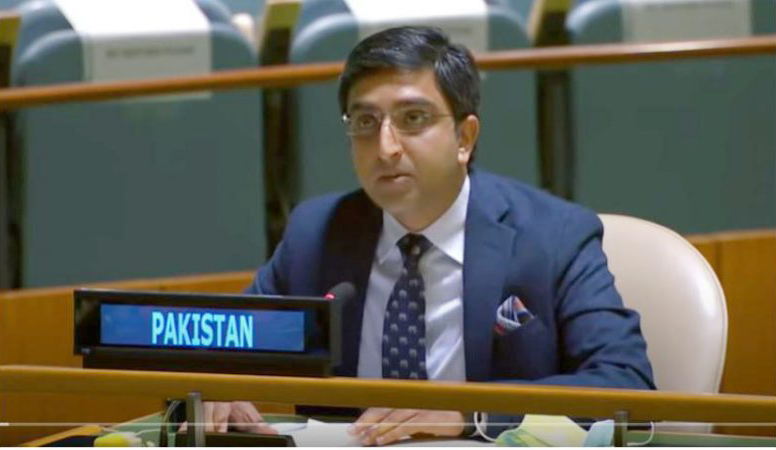 Pakistan hit back at India at the UN after New Delhi’s representative claimed Jammu and Kashmir as India’s ‘integral part’ and alleged that Islamabad promoted terrorism, with the Pakistani delegate asserting that the Himalayan state is an internationally-recognized disputed territory.

“In Jammu and Kashmir, India has no other claim than that of a military occupier,” Zulqarnain Chheena, the Pakistani delegate, told the General Assembly while rejecting Indian claims. “India is compelled to use naked force to impose its occupation on an unwilling and oppressed people,” he added.

The Pakistani delegate was reacting to the Indian representative, Mijito Vinito, who, while exercising his right of reply to Prime Minister Imran Khan’s speech, said that the Pakistani leader interfered in the internal affairs of India by raising the Kashmir dispute at the UN.

In his statement to the 193-member Assembly, Imran Khan shed a spotlight on Prime Minister Narendra Modi’s India, which he said is defined by its oppressive and brutal Indian occupation of Jammu and Kashmir; the egregious human rights violations of the Kashmiri people; the deliberate promotion of the supremacist Hindutva ideology to suppress and marginalize its minority communities including millions of Muslims; the expansionist Indian designs against Pakistan and its other neighbours; and the avowed aim of New Delhi to act as a regional bully.

As regards India’s attempt to link Pakistan with terrorism, Chheena, a first secretary at the Pakistan Mission to the UN, said that the fact is that India was ‘mothership’ of terrorism and used it against each of its neighbours, its own people and against the Kashmiris. India’s accusations are a ‘shameful’ attempt to deflect attention from the real issues, he said, adding that it will not escape accountability for its crimes.

As India’s descent into a fascist State accelerates, the Pakistani delegate said the projections made by the Pakistani prime minister last year regarding an imminent disaster fuelled by RSS (Rashtriya Swayamsevak Sangh) policies are being confirmed. He highlighted the example of “Shaheen Bagh”, the Muslim majority area of New Delhi, where protesters took to the streets in February against discriminatory laws. Countless Muslims were killed, their homes burned and their property looted, all with the complicity of the Indian State.

“The charred streets of Delhi not only exposed the Hindutva ideology in all its ‘intolerant glory’; they also manifested the trusted method that the Hindu extremists have resorted to – from Gujarat in 2002 to Delhi in 2020, to address the ‘Muslim menace’,” the Pakistani delegate said. “Just like the victims of Gujarat, the victims of Delhi will no doubt search in vain for justice in this new bastion of fascism.”

“Meanwhile, the perpetrators of these crimes will continue to enjoy impunity and will be encouraged to spill more Muslim blood to further consolidate their hold on power; and to eliminate all vestiges of India’s Islamic heritage; by destroying its grand mosques and monuments like they did with the Babri mosque; and attempt to change India’s history by obliterating the thousand years of Muslim civilization and culture.”

Elaborating on the situation in Indian Occupied Kashmir, the Pakistani delegate said, that the disputed state is not a part of India – it never was and it never will be. “The state of Jammu and Kashmir is an internationally recognized disputed territory. As decreed by the Security Council, the final disposition of the state ‘will be made in accordance with the will of the people expressed through the democratic method of a free and impartial plebiscite conducted under the auspices of the United Nations’.”

The Kashmiri freedom struggle, he said, seeks to realize the implementation of the resolutions of the Security Council in exercise of their inalienable right to self-determination. “The Kashmiris have a legitimate right to resist Indian occupation by all means at their disposal. This just struggle cannot be denigrated or described as terrorism. It is the occupying state which is guilty of terrorism against the occupied people.”

Like all oppressors, Chheena said, India continues to believe that it can subdue the legitimate Kashmiri resistance through brute force, bit its strategy of occupation and oppression. “Kashmir will be free one day,” he said, adding that the Kashmiris were not alone in their just struggle as the people of Pakistan, and those in the Islamic world and elsewhere were with them.

About India’s involvement in terrorism, he said it had hired and organized criminal groups located across Pakistan’ Western border to conduct terrorist attacks Pakistan, especially to disrupt the development of Western and Southern Pakistan.