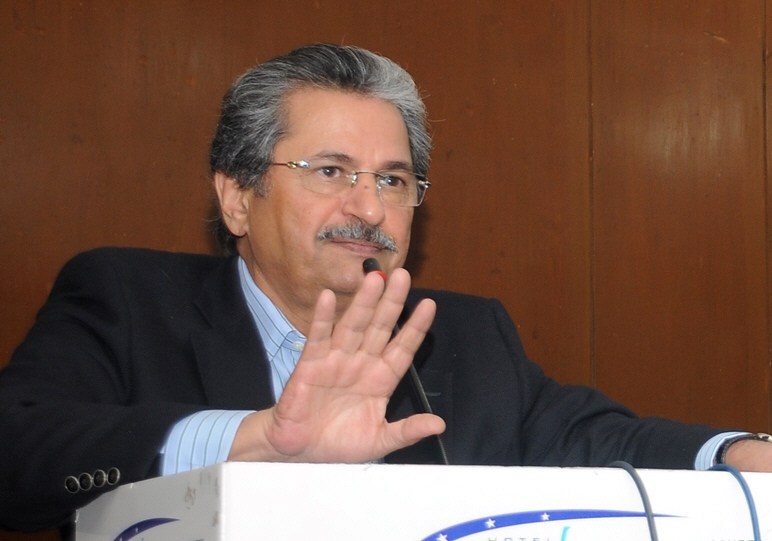 Federal Minister for Education Shafqat Mehmood said on Saturday that the decision to re-open primary schools would be taken after the National Command Operation Center’s (NCOC) meeting on September 29.

While addressing the media in Lahore, the federal education minister stressed that the government had started random testing of students for coronavirus after the resumption of educational activities in schools and universities across the country on September 15. “One per cent infection rate has been witnessed in educational institutions which is satisfactory for the government,” the minister said. “Educational institutions are being re-opened with strict implementation of SOPs related to Covid-19.”

He further said that government’s action against Covid-19 is being appreciated internationally and economic activity has resumed, with the country heading towards development despite the pandemic’s outbreak. Replying a question, he said the government is taking all-out steps to control the prices of essential commodities.

Meanwhile, Balochistan government spokesperson Liaquat Shahwani on Saturday said that the provincial government would propose in the upcoming National Command and Operation (NCOC) meeting that reopening of primary schools, scheduled to resume on Sept 30, be delayed by 15 days in view of rising coronavirus cases.

Shahwani warned of a rising coronavirus trend in the province, saying cases in Balochistan had nearly tripled since August. “Almost the same number of cases were reported in September as in May. That was around the time [Balochistan] saw a spike in cases. The flow of people in hospitals increased and we had to impose a lockdown. It was a hard experience,” he said. “Our cases have nearly tripled since August. Data suggests cases are increasing and there is danger that they will further increase in winter. The hospital flow has not increased yet but if it does, we may be heading towards the same situation as in May.”

He said Chief Minister Jam Kamal Khan Alyani had already warned of rising cases in the province and the risk of a second wave. He urged people to follow the standard operating procedures (SOPs) – wearing a mask, maintaining a distance of three to six feet and frequently washing hands.

Last week, the NCOC allowed schools across the country to resume in-person classes for grades six to eight from Sept 23 as per schedule. Earlier this month, millions of students in Pakistan returned to classes as educational institutions reopened after a break of six months. In the first phase, all higher education institutions including universities, professional colleges, vocational institutes, as well as classes nine till 12 resumed on Sept 15. Classes six to eight resumed from Sept 23 in phase two while primary students are set to return to schools on Sept 30.

But tens of educational institutions were closed soon after across the country over violation of standard operating procedures (SOPs) and detection of Covid-19 cases among some students, teachers and other staff.

Talking about measures taken by the Balochistan government, Shahwani said educational institutions where two or more coronavirus cases were confirmed had been shut down in the province. He said masks had been made compulsory for all teachers, staff members and students and fines would be imposed on those not wearing it. “We have directed our surveillance teams to work more [diligently to detect coronavirus cases],” he added.