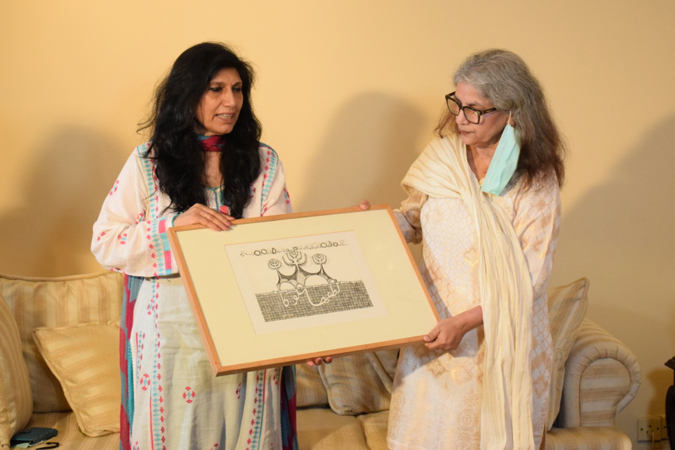 Pakistan National Council of the Arts Director General Dr Fouzia Saeed on Saturday came down hard on the critics of return of paintings to Mary Shamza by the PNCA, saying that it was a task that should have been done decades ago and that vested interests have launched a propaganda campaign to achieve their nefarious designs.

“It surprises me to read the reaction from certain quarters upon returning of paintings to Mary Shamza by PNCA after she loaned it to the institution 35 years ago,” Dr Fouzia Saeed told Daily Times. “This was a task that should have been done decades ago. Keeping someone’s artwork by force without their consent or remuneration is violation of artist’s rights,” she maintained. “Both PNCA and Mary Shemza are clear that paintings were loaned for some time and were to be returned. These two are the main stakeholders therefore matters should not be complicated. PNCA’s Board gave a unanimous decision on this issue,” she explained.

Mary Shamza, the wife of Pakistan’s famous painter Anwar Jalal Shemza, brought an exhibition to Pakistan in 1985, called Roots, consisting of more than 100 paintings of her husband. AJ Shemza, who had moved to UK and married Mary, a British national, years ago, had just died by a sudden heart attack. The exhibition was organized at four places all over Pakistan. The PNCA was the host of the exhibition. “At the time of her return to London, the PNCA asked her to loan five drawings and five paintings for continued display. We have the receipt in our records,” she said.

“Mary Shamza asked for the return of paintings but after three years, Ghulam Rasool, a famous artist and at the time the person incharge of PNCA and the National Art Gallery, wrote to her, offering Rs 40,000 for the paintings, explaining that a national institute does not have much resources,” Dr Fouzia said. “The offer of a price to purchase the paintings on a PNCA letter head, properly signed, itself is yet another proof that the paintings were not gifted as now being claimed by some trouble making factions,” she argued.

“For many years, Mary Shamza kept demanding the paintings back. This includes letters to Naeem Tahir and Jamal Shah and several secretaries and DGs,” the PNCA DG said. “In 2017, Asma Jahangir sent a legal notice on behalf of Mary Shemza to Jamal Shah, the then DG, but no progress was made.

In late 2019, the current government placed PNCA under National Heritage and Culture Division, in the leadership of Shafqat Mehmood, Federal Minister for Education and National Heritage. Dr Fouzia Saeed was appointed as new director general in January 2020.

“A reform in PNCA began under the guidance and able leadership of Shafqat Mehmood. Massive efforts were made to organize the systems and clean out the long standing/pending issues that gave the institution a bad name, inside and outside the country,” the DG said. “National art institutions should be the face and pride of a country and not an embarrassment with allegations of theft. The concern that other heirs will also come forward is not relevant as Mary Shemza herself gave the paintings and is not claiming what her husband gave and is MA still alive to take it back,” she said. “Besides there are scores of letters she wrote throughout the three decades on our record. Thus, it is a matter of relief for us to have resolved the issue of our gross negligence in the past,” she said.

Mary Shemza has already written a letter of thanks to the prime minister, the minister and PNCA DG Dr Fouzia Saeed for returning the paintings.