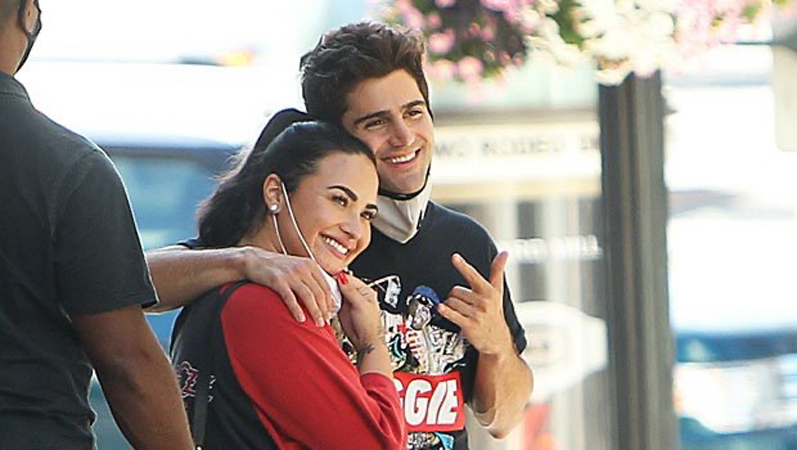 Demi Lovato just wants to give her heart a break. Just two months after Max Ehrich proposed to the pop star with an estimated $1 million diamond ring, E! News has learned their engagement is over.

Demi’s fans began speculating something between the typically inseparable pair was amiss when members of her inner circle unfollowed the actor on Instagram. According to her Lovatics, those close friends and family members of Demi’s included her sister, Dallas Lovato, and longtime pal Matthew Scott Montgomery.

As the insider explained, “People close to Demi have expressed that they are worried and are hesitant about Max.”

Despite their concerns, the source said Demi is “head over heels for Max and doesn’t want to be heartbroken. She truly cares about Max and wants to think his intentions are genuine.”

Demi and Max’s short-lived love story began back in March when they started self-quarantining together at the former Disney star’s L.A. home. Their relationship progressed quickly, and by June the 28-year-old was already planning their long-term future together. Demi gushed on Instagram at the time, “I spend my days with you, bare faced and in a bathing suit.. I feel unconditionally loved and accepted by you in a way that I’ve never felt before.. I can’t explain it or you.. you’re indescribable, you beautiful, man. Inside and out you are jaw-droppingly gorgeous.”

Then, on July 22, The Young & the Restless star popped the question on a beach in Malibu, Calif.

“They both always knew they were each other’s perfect match. Demi has been in love with Max since the second they went on their first date,” one insider shared with E! News.

Echoed another, “They had a very deep connection from the moment they met that was different and unlike anything they had ever felt before… They just click on every level.”

Demi even purchased a $7 million home in Los Angeles, seemingly for her and Max to share as they planned what the singer predicted could be an intimate elopement ceremony.

But in mid-September, the cracks in their foundation began to show when Demi publicly reacted to her fiancé’s past social media posts, in which he allegedly said Selena Gomez was “prettier” than Demi. Demi said Max’s tweets were photoshopped, writing on social media, “So while on one hand I understand and have compassion for those who are so horrified at the reality of 2020 that they gotta distract themselves with doctored images in order to not focus on how bad these times are—but on the other hand, if you aren’t 13 years old trying to grasp the reality of right now, put on your adult underpants and write about what actually matters. Please.”