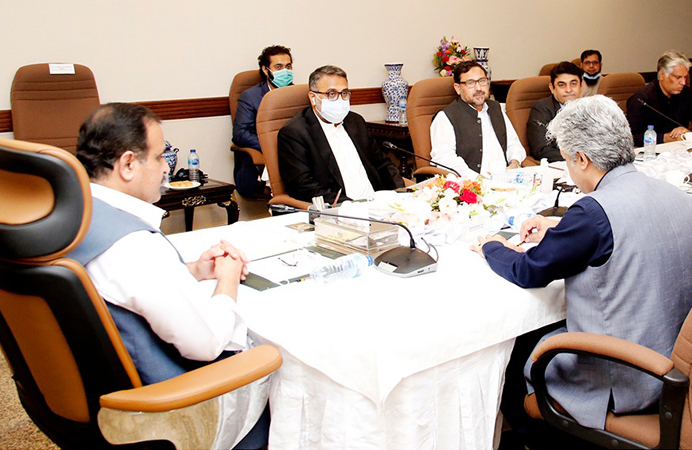 Chief Minister Punjab Sardar Usman Buzdar has given in-principle approval to taking various measures including up-gradation of the nursing service structure while presiding over a high-level meeting. It is decided to streamline the promotion criterion of the nurses and the meeting also gave in-principle approval to awarding MPhil and PhD scholarships to the nursing sector.

CM Usman Buzdar said that nursing schools will be given the status of colleges, along with the provision of hostel facility, so that the residential problems of the nurses could be solved permanently. He said that nurses would be sent abroad on scholarships and necessary measures will be taken to ensure the betterment of the nursing sector. A mega package will soon be announced by the CM for the nurses.

Usman Buzdar said that the Punjab government has introduced revolutionary reforms in the health sector and more than 50 lakh ‘Sehat Insaf Cards’ have been distributed among the deserving people. Its scope will further be extended gradually, he said. The CM directed that a comprehensive campaign should be launched for creating awareness among the beneficiaries of Sehat Insaf Cards besides examining to include social security hospitals in the panel. The Punjab Health Initiative Management Company’s board should immediately be completed, he added.

Usman Buzdar, while directing to prepare a business plan for Pakistan Kidney and Liver Transplant Institute, said that the health department, with the consultation of concerned authorities, should present final recommendations so that decisions could be taken for the effective working of the institution.

Secretary Specialized Health and Medical Education gave a briefing regarding proposed measures for the betterment of nursing cadres, Sehat Insaf Cards and Pakistan Kidney and Liver Transplant Institute. The chief minister was briefed that 62 kidneys and seven livers have been transplanted so far in PKLI.

On the directions of Chief Minister Punjab Sardar Usman Buzdar, the provincial government has issued the gazette notification of The Sugar Factories (Control) Amendment Ordinance, 2020.

In this regard, the CM has stated the protection of sugarcane farmers’ rights has been ensured through the amended ordinance as up to three years imprisonment or a maximum of 5 million rupees fine could be imposed for violation of the ordinance. The sugarcane farmers will not face any difficulty in receiving their dues nor anybody could dare to exploit them, he added. Similarly, the sugar mills owners will be bound to purchase sugarcane at the notified rate and issuance of the receipt bearing weight and price. The CM maintained the farmers will reap the reward of their hard work due to the restriction of payment through the bank. Similarly, the crushing season will start in time and the government will continue to protect the rights of the farmers, concluded the CM.