Buzdar, Bajwa agree to speed up work on CPEC projects 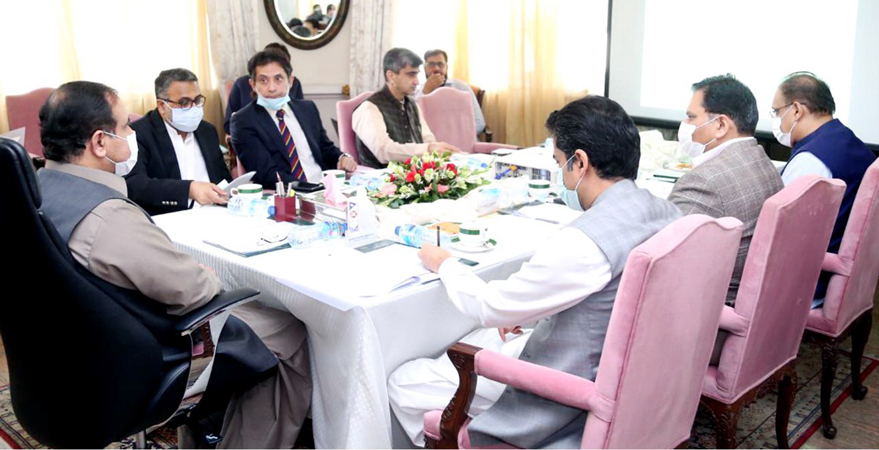 Chairman CPEC Authority Lt Gen (r) Asim Saleem Bajwa called on Chief Minister Punjab Sardar Usman Buzdar at his office and discussed progress made on CPEC projects in the province. Both agreed to expedite work on CPEC projects and decided to give a priority focus to agri research along with the need for introducing new seeds for improving crops productivity.

Talking on the occasion, the CM expressed the satisfaction that work is being carried out on CPEC projects on a priority basis. The completion of CPEC projects will help improve the economy, he maintained. CPEC projects situated in Punjab are being completed with speed and transparently, he added.

The CM told that the test-run of the orange line metro train has been completed and it has been planned to operationalize it by the end of the next month. The Punjab Masstransit Authority has been issued instructions and tree transplantation and beautification of the route is being done as well, he said.

Chairman CPEC Authority stated the CPEC projects are being completed speedily as CPEC is vital for the country. The situation of CPEC projects is satisfactory in Punjab and the province also has a lot of potential in the agriculture sector, he added.

The CM expressed the satisfaction that solid steps have been taken for the promotion of higher education and vowed that a university will be set up in every district. The people will be provided with opportunities to access quality higher education near to their homes, he added. It is satisfying that new universities are being established and the higher education system is synchronized with the needs and requirements of the modern era, he said.

The CM regretted that the education system was used for personal projection in the past and no attention was paid to providing higher education opportunities to remote hinterlands. It is sanguine that the incumbent government has opened the doors of higher education to the students of backward and neglected areas by opening new higher education institutions there; concluded the CM.

Separately, Chief Minister Punjab Sardar Usman Buzdar chaired a meeting at 90-SQA in which he was briefed about the progress made on the annual development programme 2020-21.

The CM directed timely utilization of development funds adding the speed of work should be accelerated on development projects and ongoing schemes be completed on a priority basis. He said that separate funds have been allocated for south Punjab and its ADP will also be evolved separately. The funds reserved for south Punjab will not be transferred to anywhere else, he added. The land has been allocated for the establishment of south Punjab secretariat with an amount of Rs 4 billion, he added.

Chief Minister Punjab Sardar Usman Buzdar has sought a report from RPO Faisalabad about an incident of girl’s molestation in Chiniot. Meanwhile, the police have registered a case and three nominated accused have been arrested.

Upon the notice of Chief Minister Punjab Sardar Usman Buzdar, the Kasur police have arrested Akram and Sufiyan involved in the murder of 5 persons in Chunian while raids are being conducted to arrest the rest of the criminals.