‘The Disciple’ wins again at the Toronto International Film Festival 2020 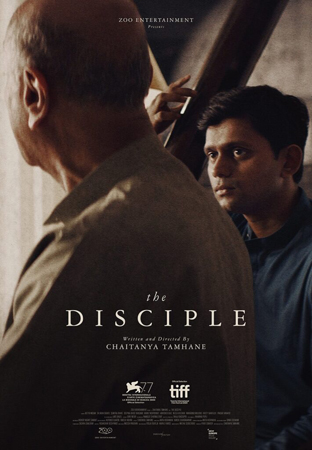 The Disciple, written and directed by Chaitanya Tamhane and produced by Vivek Gomber of Zoo Entertainment Pvt. Ltd., has won the Amplify Voices award presented by Canada Goose at the 2020 Toronto International Film Festival.

This is the third award for The Disciple this month, after bagging the Best Screenplay award and the International Critics’ Prize by FIPRESCI at the 77th Venice Film Festival.

The film was selected for the Amplify Voices award by the all-Canadian jury comprising actress Sarah Gadon, actor and producer Damon D’Oliveira, and director Danis Goulet. The jury described it as “visually sumptuous and insightful”.

This is what it had to say about the film, “Masterful in its restraint, this film about a struggling classical Indian musician explores the tension between traditional discipline and the contemporary impulse to be instantly validated.”

The award offers a $10,000 cash prize, made possible by Canada Goose. Canada Goose embraces diversity in all its forms and definitions, including technique and passion that transports storytelling to screen. These awards will be presented to the three best feature films by under-represented filmmakers. The other winners of the Amplify Voices awards are Night of the Kings by Côte d’Ivoire director Philippe Lacôte, and Inconvenient Indian by Canadian director Michelle Latimer.

Talking about the honour, the director stated, “We are super excited. We are in lockdown in Mumbai and it’s news like this that brightens our day and gives us hope. I would like to thank Cameron Bailey and the entire team of TIFF for selecting The Disciple, and also the jury for giving us this award. I would like to dedicate this award to Vivek Gomber, the producer of the film, without whom all of this wouldn’t have been possible. And finally, I also want to thank the audiences of the film festival which make TIFF what it is, and which support our work and support our films. This means a lot to us.”