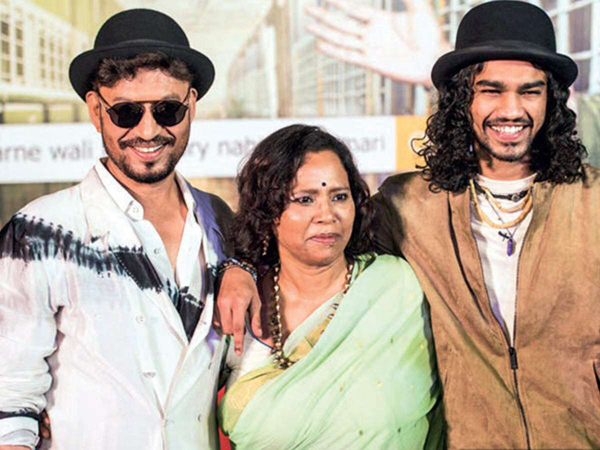 Irrfan Khan’s family and fans are yet to get out from the shock of the untimely demise of the versatile actor.

The versatile actor passed away on April 29, 2020. The actor was undergoing treatment for Neuroendocrine cancer and was admitted at Mumbai’s Kokilaben Dhirubhai Ambani Hospital due to a colon infection. Irrfan’s son Babil Khan and wife Sutapa Sikdar have been sharing various pictures of their good old days spent with the late actor on their social media accounts.

Recently, Babil took to his Instagram account and penned a hearfelt note for his mother. Babil called her a source of guidance and comfort – ‘that light house in the storm’ – and hoped to give her every joy. The note, which seems to be addressed to Irrfan, Babil writes, “You told me to take care of her but it turned out that she took care of us like you did. Mamma. That light house in the storm, I hope I can give you the world to travel, and everything more that you desire, there is nothing left for me to live now but you and Ayaan (sic)”.

Babil has been painting his Instagram profile with beautiful pictures of his late father. Last month, he took to his Instagram handle to give Irrfan’s fans a glimpse of his room. The room is filled with sweet memories of Irrfan and his family including a big portrait of Irrfan’s wife Sutapa Sikdar with her sons on the wall. There is also a huge door with family pictures all over it.

Recently, in an interview Sutapa Sikdar had talked about her late husband what are the qualities that made him an ideal husband and a father, and how he spoilt her for life. She made a revelation and said, “Irrfan was not husband material. Nah, he wasn’t.”

She added, “I tried to sometimes make him ask for normal things – like celebrating birthdays. But it didn’t work so red roses, dark chocolates, diamonds, Valentine’s Day etc, were not discussed, leave aside being considered.” She also revealed the gentle things the actor did to keep her happy and smiling.”

She also stated about the one grudge she has against him. She said, “The only thing I have a grudge against him is, he has spoiled me for life. His strive for perfection doesn’t let me settle for ordinary in anything. There was a rhythm which he always saw in everything, even in cacophony and chaos, so I have learnt to sing and dance to the music of that rhythm, even with my tone-deaf voice and two left feet.”

Irrfan Khan, who made his debut with a small role in Mira Nair’s Salaam Bombay in 1988 was known for his performances in Maqbool, The Namesake, A Mighty Heart, Paan Singh Tomar, Life of Pi, The Lunchbox, Haider, Gunday, Piku, Talvar, and Hindi Medium, amongst others. His last film Angrezi Medium released in March this year.