‘Enola Holmes’ — there is a new Holmes in town 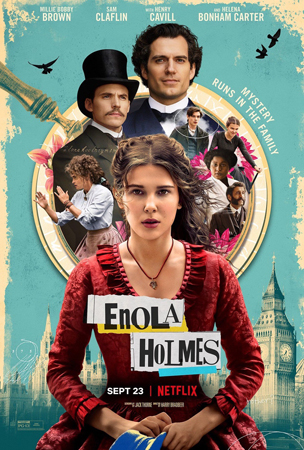 Rarely a film comes long which fills you with chuckling delight, makes you sort of tizzy with its balanced pace, makes a strong political point and yet fills you with hope.

Enola Holmes, which is streaming on Netflix, does all this without getting bogged down by one idea alone.

It’s 1884 and England is on the cusp of a new era, courtesy an important vote in the House of Lords, which will allow the expansion of the suffragette considerably. Interesting times, perfectly suited to introduce Enola Holmes, the little known sister of Sherlock Holmes, a detective whose deduction skills had already earned quite a reputation. Enola, whose name is literally ‘alone’ spelt backwards, is an exception in 18th century England, as we learn in the very first five minutes of the film. She doesn’t embroider, or wear hats and gloves, the horror! Instead she plays chess, practices jujutsu with her mother in an overgrown backyard and there are experiments in chemistry and tennis and archery lessons. Her mother who has always blazed her own trail — we later come to know — makes sure that Enola follows in her footsteps. The two lead an adventurous, interesting life in Ferndell Hall, away from the world and the established elder brothers — Mycroft, a conservative government stooge and the more popular and enigmatic Sherlock, who is distant and self-absorbed.

Until, Enola wakes up a summer day to find her mother gone from the rambling house. Enter her two semi-estranged brothers, who have swooped in to salvage the situation which is replete with a wayward intrepid teen and a missing mother. While Mycroft has plans to send away Enola to a finishing school, “to undo the damage wielded by their mother,” Enola, the intrepid teen, expert solver of ciphers, has other plans. Therein begins the cat and mouse game of Enola embarking on a mission to look for her mother, while her much elder brothers are chasing their own tails trying to keep up.

The Sherlock universe is already well populated, with the likes of Robert Downey Jr, Benedict Cumberbatch having donned the famous ear-flapped travelling cap, and who can forget Johnny Lee Miller in the Elementary with Lucy Lui as Joan Watson, upending gender in the police procedural show. House MD too was inspired by Sherlock Holmes. With Enola Holmes, we are taken into that universe yet again, and its a pleasant surprise. We meet a Sherlock who speaks less, is happy to play second fiddle to his younger sister and is downright proud of her achievements. The lack of a super-sized ego and arrogance took some getting used to, but that’s what David Bradbeer, the director was going for. This is where Enola Holmes goes beyond Elementary.