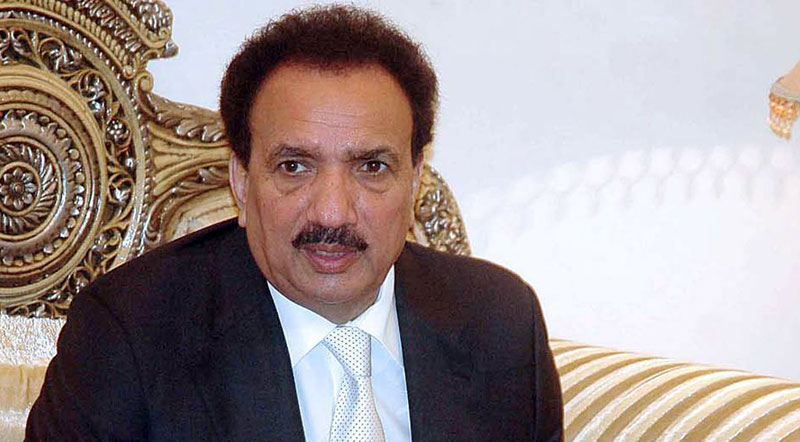 Chairman Senate Standing Committee on Interior Senator A Rehman Malik said that in different parts of the world repressive forces are committing brutalities against innocent people but sadly the world community including United Nations have turned as silent spectators. He said that cruelty is condemnable in every shape and form.

Senator Rehman Malik was addressing a peace conference in National Library of Pakistan wherein he was invited as chief guest. While addressing the conference, he said Kashmiri people have been deprived of the basic amenities of life and been caged in their own homes without basic necessities including food and medicine. He added that infants are dying without food and even pregnant women are not allowed to hospitals. He expressed that Indian forces are committing unprecedented brutalities against the innocent Kashmiris in terms of mass murders, mass blinding, enforced disappearances, torture, rape, political repression and suppression of freedom of speech.

He said that Prime Minister Narendra Modi, has increased the number of troops in Indian Occupied Kashmir to the level of 700,000 plus to kill and torture the innocent people there. He urged the government to file a lawsuit in International Court of Justice (ICJ) and International Criminal Court (ICC) against Indian Prime Minister Narendra Modi as he must be convicted for his crimes against humanity. He said “If a small country like Gambia can stand for Rohingyan Muslims why can’t Pakistan go for their own oppressed Kashmiris in ICJ and ICC. The Senator maintained that he along with legal fertility and APHC leaders would file a lawsuit in the ICJ if the government further delay filing the reference.

Rehman Malik said that the world community must come forward and condemned and stand against all kinds of repressions and brutalities and the United Nations and other so-called champions of human rights must play their due role. He urged the OIC to raise its voice for oppressed people of Kashmir and Palestine. He said that our hearts equally hurt for the people Palestine and we stand by them firmly.