Middle-level classes at schools set to resume from today 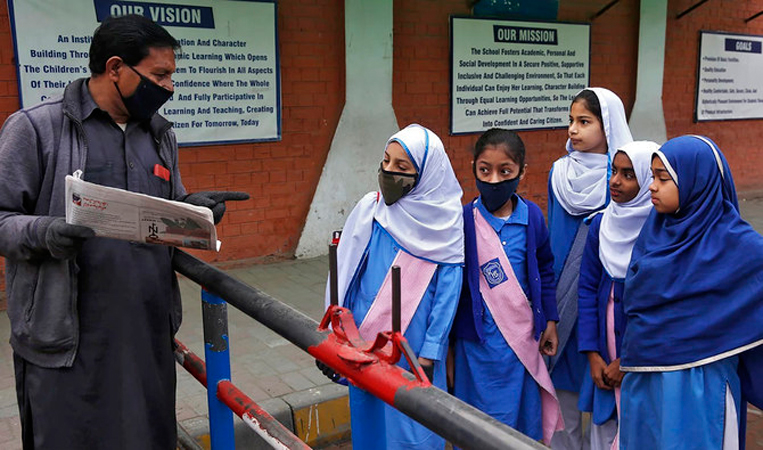 In the wake of National Command and Operation Centre (NCOC) decision, the government on Tuesday decided to allow middle-level classes in the second phase of restoration of educational activities from today.

According to a statement issued by the NCOC, Planning Minister Asad Umar, Education Minister Shafqat Mahmood, Interior Minister Brig (r) Ijaz Ahmad Shah, and Special Assistant to the Prime Minister on Health Dr Faisal Sultan, as well as the provincial education ministers and secretary education, attended the meeting, which recommended for restoration of educational activities.

However, Sindh Education Minister Saeed Ghani clarified that the provincial government will allow resumption of middle classes from September 28 as announced earlier. “The decision to postpone reopening of schools was taken after reviewing the implementation of SOPs in the first phase,” Ghani said in a statement.

The government in the previous week had announced reopening of educational institutions across the country in phases, starting September 15. As per the decision, all universities, higher education institutes and colleges and high schools opened on September 15. After reviewing the pandemic situation for a week, the students of sixth, seventh and eighth classes have been allowed to attend schools from September 23. The primary classes (one to five) would resume on September 30 in the third and the last phase.

“It was really a difficult and tough decision to reopen the educational institutions,” Education Minister Shafqat Mahmood said in a statement. He said the decision was taken after thoroughly analyzing regional and global trends of the outbreak, holding extensive consultations by the ministries of education and professional training, and national health services, regulations and coordination with the federating units, coupled with research by the NCOC.

He clarified that the decision would be applicable on all the educational institutions of both public and private sectors, besides vocational centers and religious seminaries, which will enable millions of students to resume studies after a hiatus of around six months. The minister also claimed that the government had to take difficult decisions during the lockdown period, which included the promotion of around four million students of higher secondary education to their next classes. Expressing his gratitude to the parents of students for showing perseverance during the difficult times, he urged the teachers and school administration to fully cooperate with the government and ensure compliance of the anti-Covid SOPs at their insinuations. He warned the school administrations of strict actions in case of non-compliance. He also lauded the efforts of NCOC for making the decision possible.

Meanwhile, three positive cases were also reported in schools run by Federal the Directorate of Education (FDE), while 19 cases have been reported in various private and public schools.