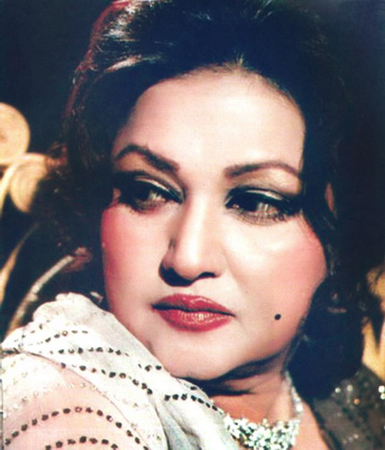 The 94th birth anniversary Noor Jehan, also known as Malika-e-Tarannum (Queen of Melody) was observed on Monday, it was reported.

Born with the name of Allah Wasai in Kasur on September 21, 1926, she was given the honorific title of ‘Malika-e-Tarannum’ by her fans. Her artistic career is based on seven decades.

Noor Jehan had started her musical career from Calcutta at the age of nine as a singer child star. She inherited music as she was born in a music family.

She sang more than 10,000 ghazals and songs in various languages including Urdu, Hindi, Punjabi and Sindhi.

After partition, she moved from Bombay and started her film career in Pakistan as actress, singer and the first female film director with film ‘Chann Wey’ in 1951. Her last film ‘Ghalib’ was released in 1961.

She received many awards‚ including the highest Pakistani honour in entertainment‚ Tamgha-e-Imtiaz (The Pride of Performance) in 1966.

Malika-e-Tarannum’s national patriotic songs, during 1965 Pak- India War, are an important part of our national history.

Noor Jehan died on December 23, 2000 in Karachi as a result of heart failure.