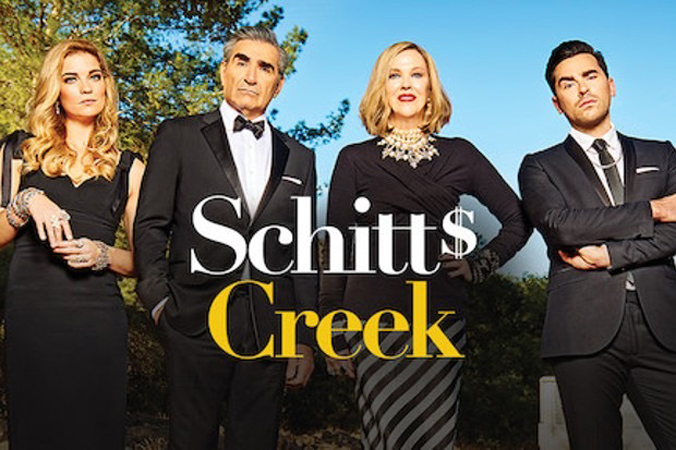 The 2020 Emmys definitely smelled like a rose. Or should we say Roses because the Rose family just swept the whole damn thing.

Schitt’s Creek took home the award for Outstanding Comedy Series at the 72nd annual ceremony on Sunday night, the cherry on top of the Pop TV show’s massive night after every main cast member won their category. Just call it a Schitt’s streak.

“Oh boy, our show at its core is about the transformational effects of love and acceptance and that is something we need more of now than we’ve ever needed before,” star and creator Daniel Levy said while accepting the award from the cast and crew’s own viewing party. “And I just want to say for any of you who have not registered, please do so. And then go out and vote because that is the only way that we are going to have love and acceptance out there. Please do that. I am so sorry for making this political, but I had to!”

Daniel Levy then asked his father, co-star and co-creator Eugene Levy to hop in do say “the fun stuff,” which included being his ridiculously charming and delightful self and showering his son with love.

“I also want to thank once again this young man,” he said, “who took our fish out of water story man about the Rose family and transformed into a story about celebration of inclusivity, a castigation of homophobia, and a declaration of the power of academy.” No, we’re not crying, a branch just fell in our eye while we were chopping onions, OK?!

In total, Schitt’s Creek won nine Emmys this year, setting a new record for most wins in a single year for a comedy series.

Funnily enough, E! News asked Murphy about the possibility of a Schitt’s Creek sweep after the nominations were announced, and she said, “That’s an optimistic way of looking at it. I’m not gonna hold my breath but stranger things have happened.” Glad you didn’t hole your breath, bebe. Schitt’s Creek faced stiff competition in the category, beating out Curb Your Enthusiasm, Dead to Me, The Good Place, Insecure, The Kominsky Method, The Marvelous Mrs. Maisel and What We Do In the Shadows to take home the trophy.