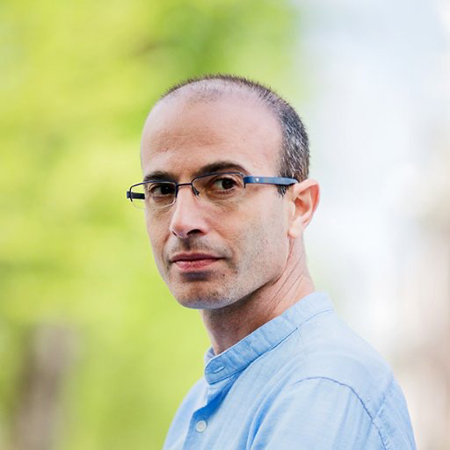 Yuval Noah Harari is an Israeli historian and author, completed his PhD degree at Jesus College, Oxford. ‘Sapiens’ is the first in a series of his books on the past, present and the future of humankind, following ‘Homo Deus’ and ‘21 Lessons for 21st Century’. Harari uses all the disciplines at his disposal to construct a multi-dimensional narration of the human story using history, biology, anthropology, archaeology, and evolutionary psychology to explain everything from our collective attitudes and behaviors.

Sapiens has been read and recommended by the likes of Barrack Obama, Mark Zuckerberg and Bill Gates. Jared Diamond, Pulitzer Prize winning author of Guns, Germs, and Steel (the book which influence Yuval to write Sapiens), says “here is a simple reason why Sapiens has risen explosively to the ranks of an international best-seller. It tackles the biggest questions of history and of the modern world, and it is written in unforgettably vivid language. You will love it!”

By combining profound insights with a remarkably vivid language, Sapiens acquires trendy reputation for it can be read by any audience, from teenagers to university professors, businessman, alongside government ministers. Millions of copies have been sold, and the book has been translated into nearly 50 languages.

The book is divided into four parts – Cognitive Revolution, Agricultural Revolution, the Unification of Mankind and the Scientific Revolution – each described as a colossal jump for humankind in its rise to global dominance.

Sapiens is comprehensive account of the rise of our species Homo sapiens from tree-dwelling ape 2.5 million years ago to now the undisputed ruler of the planet. 100,000 years ago, there were at least six different human species on earth. Today, there is only one human species left: Us Homo Sapiens. Why did we manage to survive when all our closest relatives died out here? It’s worth pointing out that extinction is a normal part of evolution.

We rule the world because we are ecological serial killers, and key cause of other human species extinction such as Neanderthals and other mega fauna – even with stone-age tools, our ancestors wiped out half the planet’s large terrestrial mammals well before the advent of agriculture. Homo sapiens rules the world because it is the only animal that can believe in things that exist purely in its own imagination, such as gods, states, money and human rights. As Harari writes “Telling effective stories is not easy. The difficulty lies not in telling the story, but in convincing everyone else to believe it.” 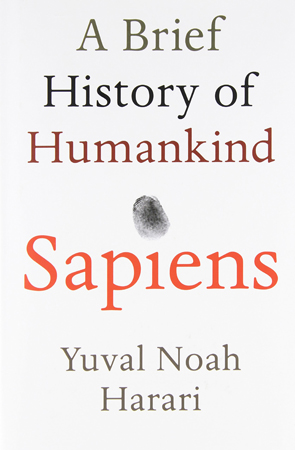 Starting from this thought provoking idea, Sapiens repeats the history of our species in different vision. It explains that money is the most pluralistic system of mutual trust ever devised; money is the only thing that everyone trust beyond the boundaries of religion, caste and creed; that capitalism is the most successful religion ever invented; that the treatment of animals in modern agriculture is probably the worst crime in history; individualism was fostered by states and markets as a way of breaking up families and communities, and that even though we are far more powerful than our ancient ancestors, we aren’t much happier. How come that such an ingenious specie, more powerful than its ancestors, creator of destruction, isn’t happier? The book provides all the answers with Harari’s simple and conversational writing style. The book provide the big picture perspective of who we are, where we came from and where we’re headed; all the while tracing the origins and evolution of our thoughts, emotions, instincts, behaviors, social structures, political organizations and our religious creeds. It was only 70,000 ago that the flood gates to human cognition, imagination and creativity opened, and in a few millennia transformed the species into the king of the ecosystem. This ‘Cognitive Revolution’ over at least 50 millennia allowed Sapiens to tame nature and makes it subservient to its needs. We created agriculture, permanent settlements and empires to help us sustain and expand our populations.

Harari points that Agricultural Revolution was history’s biggest fraud. Before that hunter gatherers spent their time in more interesting and diverse ways, and were less in danger of malnourishment and plague. Farming lives became more difficult and less satisfying than those of foragers. Farmer worked harder than the average forager and got a worse diet in return. No one was the culprit except bunch of plant species, including wheat rice and potatoes. The plants domesticated Homo-Sapiens rather than vice versa. “We did not domesticate wheat. It domesticated us.”

But the story of the rise of Sapiens is a bloody one. We left calamities, mass extinctions and ravaged ecosystems as our footprint everywhere we went. We murdered and plundered our fellow man in the name of money, power and God. The human condition was brimful with grave injustices; our history is stained with tyranny, bloodshed and exploitation, and our cognition created old myths and superstitions that ruled our everyday individual and collective lives. It was only 500 years ago that a new horizon dawned on human civilization, this was the Scientific Revolution, which over 5 centuries fueled by expanding European imperialists in search of lands to colonize and greedy capitalists looking for newer and bigger markets. Harari has boldly questioned and provoked every dominant political, economic and religious creed we believe in today calling it ‘figment of imagination’ – from our ideas of democracy and human rights, our belief in capitalism and economic growth, to our most sacred of theologies and religious ideas that billions today hold beyond doubt and question. “There are no gods in the universe, no nations, no money, no human rights, no laws and no justice outside the common imagination of human beings”

Sapiens focuses on key processes that shaped humankind and the world around it, such as the beginning of agriculture, the creation of money, the spread of religion and the rise of the nation state. It invites us to not only connect past developments with present concerns, but moreover to question our basic narratives of the world. The book’s conclusions are enlightening and at times provocative. “When we break down our prison walls and run towards freedom, we are in fact running into the more spacious exercise yard of a bigger prison”

This book is the best reason to learn history; in order to learn and predict the future consequences, like Neanderthals were once exterminated by Sapiens, Sapiens might be exterminated by upgraded version with the help of technology converting us into completely different beings, enjoying godlike qualities and abilities.“History began when humans invented gods – and will end when humans become gods.”

The writer is assistant curator in Culture, Tourism, Antiquities & Archive Department at Government of Sindh