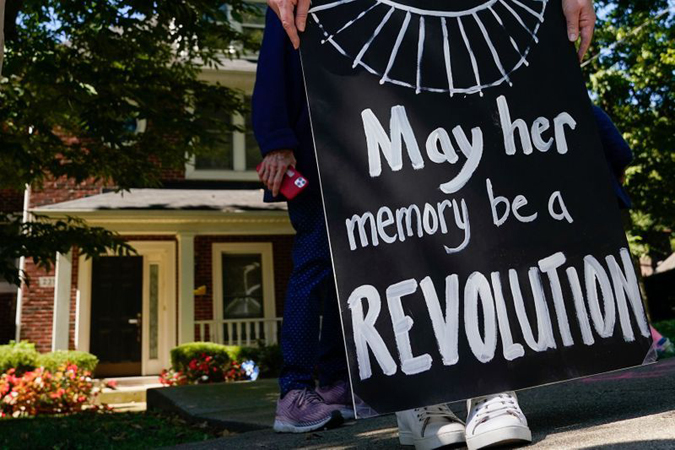 The death of Supreme Court Justice Ruth Bader Ginsburg has raised the stakes in the struggle for control of the US Senate, forcing embattled Republican incumbents to choose between trying to appeal to moderate voters or hoping to fire up a conservative base.

President Donald Trump on Saturday said he would quickly nominate a successor to the liberal icon. Republican Senate Majority Leader Mitch McConnell has promised a vote, giving the pair a chance to cement a 6-3 conservative majority on the court while their party holds both the White House and a 53-47 Senate majority.

That would raise the chances of the court overturning the 1973 Roe v. Wade decision that legalized abortion, placing one of the most heated social and political battles in the United States front and center on the campaign trail.

With the court vacancy coming so near the Nov. 3 presidential and congressional elections, Democrats argue that the voters should weigh in before Trump and McConnell rush to fill the seat — the very argument McConnell employed in 2016 to block a nominee of President Barack Obama’s.

“There are those people who have a hypocrisy meter and it just offends them,” said Larry Sabato, director of the University of Virginia’s Center for Politics, referring to Republicans’ changing strategies.

Polls show Democratic presidential nominee Joe Biden leading Trump ahead of the November election, and also give Democrats a chance of unseating enough Republican senators to capture a majority in that chamber.

Now, multiple incumbent Republican senators face the choice of backing Trump’s eventual court nominee and potentially losing some moderate voters, or rejecting that person and angering the conservative base.

About seven Republican incumbents and two Democrats face a chance of losing their seats in November’s election, according to nonpartisan election trackers. Democrats would need a net gain of three seats for a majority if presidential nominee Joe Biden unseats Trump, meaning a Vice President Kamala Harris would be on hand to break 50-50 ties in the Senate.

One of the most threatened Senate Republicans, Maine’s Susan Collins, on Saturday said the Senate should hold off approving a nominee.

“In fairness to the American people, who will either be re-electing the President or selecting a new one, the decision on a lifetime appointment to the Supreme Court should be made by the President who is elected on November 3rd,” Collins said on Twitter.

“This is an enormous political conundrum,” said Paul Sracic, a political science professor at Youngstown State University in Ohio. “You’re going to lose someone in this,” referring to segments of senators’ home-state voters.

Collins and Gardner did not respond to requests for comment.

Adding to the pressure will be independent-leaning Republican Senators Mitt Romney and Lisa Murkowski, neither a vocal Trump backer. If that pair voted against a Trump pick, McConnell would be left with a one-vote margin.

Neither Romney nor Murkowski commented publicly on their intentions following Ginsburg’s death, though Murkowski has previously indicated she would be inclined not to back any Supreme Court nominee in the final weeks before an election. Neither responded to requests for comment.

Other Republicans in competitive races saw the chance to vote for Trump’s third Supreme Court appointee as a winning issue.

“There is a clear choice on the future of the Supreme Court between the well-qualified and conservative jurist President Trump will nominate and I will support, and the liberal activist Joe Biden will nominate,” North Carolina’s Thom Tillis said in a statement.

Republican Representative Doug Collins, who hopes to win a promotion to the Senate on Nov. 3, tweeted late on Friday upon hearing of Ginsburg’s death.

“RIP to the more than 30 million innocent babies that have been murdered during the decades that Ruth Bader Ginsburg defended pro-abortion laws,” Collins said. “With @realDonaldTrump nominating a replacement that values human life, generations of unborn children have a chance to live.”

One senior Senate Republican, who asked not to be identified, said on Saturday the prospect of solidifying a conservative Supreme Court was so enticing that Republican senators might be willing to lose their majority to accomplish it amid potential voter backlash.

One other factor might prompt Trump and McConnell to act sooner rather than later in whipping a Supreme Court nominee through the Senate.

The winner of that contest would not have to wait until Jan. 2 to be sworn-in like the rest of the senators and potentially could take office by early December.