* 26-point resolution demands fresh and transparent elections in country
* Increasing interference of establishment in internal affairs of country a 'danger to nation's stability'
* Six-point action plan to depose PTI government will be implemented in phases, with first phase starting in October 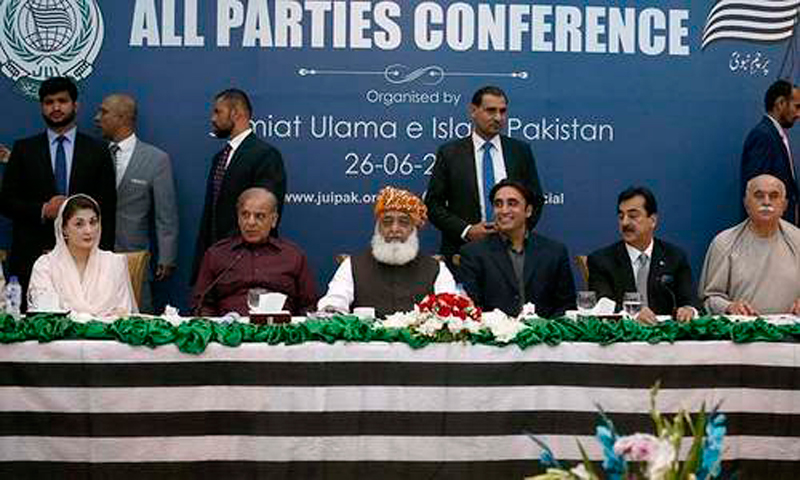 The all-parties conference organised by opposition parties in Islamabad on Sunday demanded an ‘immediate’ resignation of Prime Minister Imran Khan, adding that fresh elections be held in the country in a transparent manner.

After hours of discussion over ways to overthrow the ‘selected’ government, opposition parties passed a 26-point resolution at the all-parties conference, announcing the formation of a forum named ‘Pakistan Democratic Movement’ (PDM) – an ‘alliance structure which will lead and guide nationwide protests against the anti-public and anti-nation government in a disciplined and integrated manner’.

The resolution, read out by JUI-F chief Maulana Fazlur Rehman at a press conference held after the APC, stated that the current government has been granted ‘fake stability by the same establishment’ that interfered with the elections to bring the incumbent rulers to power. It expressed ‘extreme’ concern over the increasing interference of the establishment in internal affairs of the country and regarded it as a ‘danger to the nation’s stability and institutions’.

He said that the forum demands transparent elections in the country and calls for electoral reforms. “The selected government has ruined the common man’s life with record-high inflation, unemployment, and taxes […] we demand that the prices of flour, sugar, ghee, electricity and gas be immediately brought down.”

Due to the ‘selected’ government’s failed policies, the crumbling economy is posing a serious danger to the country’s atomic power and sovereignty, said Fazl. “The 1973 Constitution, the 18th Amendment and the current National Finance Commission (NFC) award are a reflection of the nation’s united viewpoint and we will fight to guard these from any attack and will protect our provincial autonomy. No compromise will be made on this.” Fazl said that the opposition rejects the ‘nefarious intentions’ of introducing a presidential system in the country. “The selected government is responsible for the fall of Kashmir,” he said, alleging that India’s move to annex Indian-occupied Jammu and Kashmir was made ‘with the incumbent government’s support’.

The APC expressed grave concerns over the ‘complete failure’ of the government’s policy regarding Afghanistan, said the JUI-F chief, adding that the meeting condemns ‘unprecedented’ gags on the media and censorship. It also condemned the ‘false cases based on political revenge’ against political leaders, leaders, and activists, he said. According to the declaration, due to the ‘non-implementation’ of the National Action Plan, there has been ‘a surge in terrorism’. The forum also expressed grave concerns over the dismal law and order situation, saying that the government had ‘failed miserably’ to ensure the basic rights of the citizens. The PDM also agreed upon a six-point action plan to depose the incumbent government, which would be implemented in phases. In the first phase that starts in October, opposition parties will hold joint rallies in all four provinces. The second phase will begin in December of this year, during which the opposition will hold ‘huge public demonstrations’ across the country. In January next year, the opposition will set out on a ‘decisive long march’ towards Islamabad.

The opposition will also enlist lawyers, traders, farmers, students, media as well as members of the civil society in its movement. In order to oust the government, opposition parties will use ‘every legal and constitutional option in and out of parliament, which include moving no-confidence motions and collective resignations from assemblies at an appropriate time’, the resolution stated.

Responding to questions during the press conference, PPP chief Bilawal Bhutto Zardari said that the PDM wants a ‘non-political establishment’ as the Constitution does not allow the establishment to be involved in political matters of the country. He said that all the options listed in PDM’s action plan and joint resolution are constitutional and legal, including protests and demand for resignation.

Earlier during his address to the APC, PML-N supremo Nawaz Sharif said the opposition’s struggle is not against Prime Minister Imran Khan but those who brought him into power through the 2018 elections.

In his welcome note, Zardari thanked the attendees, noting that the APC should have taken place quite a while ago. “The thinking pattern of the selected prime minister is that of a major,” he said. “Since the very beginning we’ve been speaking against the fake mandate and this manipulation. Bilawal is probably the first leader to raise concerns that the government is selected,” he added.