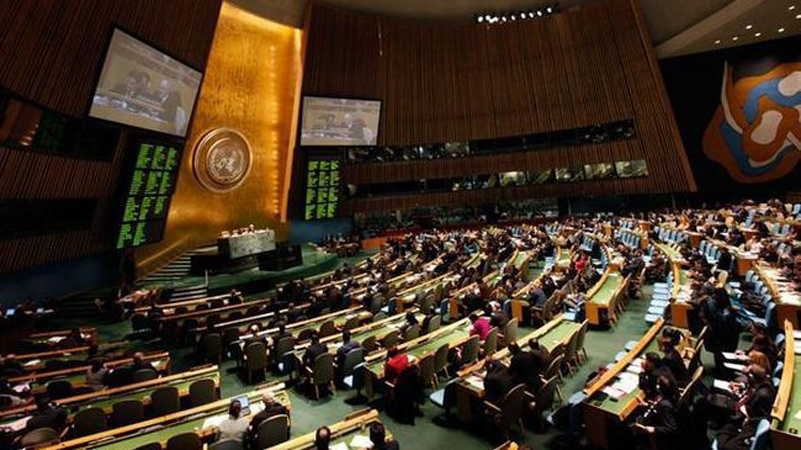 The General Assembly, acting on the recommendation of its General committee, has adopted a 183-item agenda for its seventy-fifth session that includes world’s most vexing issues – from poverty and economic development to peace and security.

The 193-member Assembly, which had before it the first report of its General Committee – the Assembly’s steering body – also formally endorsed the recommendation that its general debate will be held from September 22 to 26. For the first time in UN history, the debate will be held almost entirely online, due to the ongoing coronavirus pandemic and regulations on international travel and large gatherings.

World leaders, including Pakistan Prime Minister Imran Khan, and top officials will submit video statements to be played in the General Assembly Hall. Underpinning this year’s agenda , which includes 11 new items, is the theme of multilateralism. World leaders are expected to debate issues including the global response to the coronavirus pandemic and sustainable development. Discussions on climate change, biodiversity, and nuclear disarmament are also on the agenda.

At Friday’s session of President of the Assembly’s seventy-fifth session, Volkan Bozkir, a veteran Turkish diplomat, highlighted that the General Committee drew the world body’s attention to the fact that practical arrangements for the conduct of the current session will be affected by the COVID-19 pandemic, including with regard to whether or not certain events take place, how they are conducted and the number of attendees.

He noted that all changes reflect risk assessments and advice provided by the Occupational Safety and Health Committee of the Crisis Operations Group, and are also based on host city and state guidance, the current phase of the COVID-19 reintegration plan for the United Nations Headquarters complex and an up-to-date understanding of the risks posed by the pandemic to delegates and United Nations personnel.

The Assembly also formally endorsed the decision, without setting a precedent, that where physical presence is not practicable, a pre-recorded statement can be submitted by those who are invited to make opening statements at the high-level meeting to commemorate the seventy-fifth anniversary of the United Nations, scheduled to be held on Monday, 21 September.

All but one agenda item was approved by consensus, with Member States disagreeing on the inclusion of the topic known as the “responsibility to protect”. By a recorded vote of 101 in favour to 13 against, with 22 abstentions, the Assembly decided to include the item “The responsibility to protect and the prevention of genocide, war crimes, ethnic cleansing and crimes against humanity”.

Prior to taking action on the item, several delegates explained their opposition to the item’s inclusion, with Syria’s representative, while requesting a recorded vote on the matter, saying that including it would only deepen existing misunderstandings, especially since some Governments continue to use the concept as a pretext for interference and the imposition of unilateral economic sanctions.

The representatives of Nicaragua and Iran said, among other things, that there is no clear definition of the concept. Cuba’s delegate said the item’s inclusion is premature, and the Russian Federation’s representative called for adopting the previous approach of holding informal discussions. Several delegates, including those from Denmark and Ukraine, indicated that they would vote in favour of its inclusion.