* Young activists demand government not only acknowledge symptoms of the climate problem, but the actual problem itself 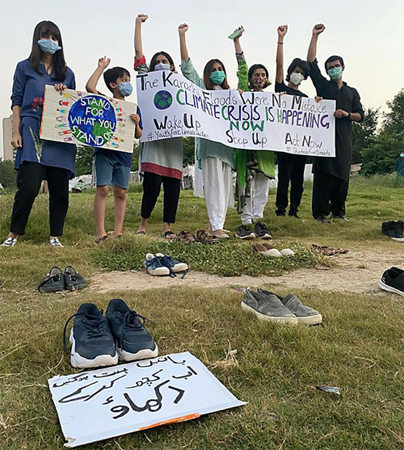 The green belt in front of Press Club was full of shoe pairs kept in an orderly way for a ‘shoe strike’ held by Youth Climate Activists, a group of around 40 young activists from all over Pakistan on Saturday.

The organisers all aged between 16-17, held placards in their hands which said “The Karachi floods were no mistake. The climate crisis is happening now. Wake up. Step up. Act now.” And the shoes had posters next to them as well, saying, “It’s now or Never.” And “There is no Planet B”.

“Covid-19 meant that people did not want to gather in large groups to protest, and therefore, people left their shoes there instead of actually being present. A shoe strike is a novel idea in the age of Covid-19,” said Hania Imran, one of the organizers of the strike.

The young activists held this strike to demand the government not only acknowledge the symptom of the problem, but the actual problem itself. Meaning they not only help when the floods have happened, but stop the floods from actually happening in the first place.

They questioned why it has gotten to this point and why there is still no proper action being taken; both by big corporations, our government and big carbon emitting countries. They believed it was not just the job of the ministry of climate change, but the entire government itself. They felt their future was being destroyed in front of their eyes.

Khadija, another organizer said, “Let’s not exploit our own future by our own hands. Climate change is undeniably happening. Look around yourself; you might find the whole of Sindh drowning.”

Hania Imran said, “World leaders are failing us. We are seeing the sixth mass extinction on Earth, and Pakistan will be more affected than contributing. We need international governments and the Pakistani government working together for this problem to be solved before the ten year deadline given to us by the UN. We need to act for the already vulnerable and poor in society who will be affected most.”

Razan, a member and a youth climate activist himself said, “Within a single lifetime, the consumption of fossil fuels has brought us on the verge of a climate collapse. Now only a single lifetime can set things straight; our lifetime.”

Rida Piracha, one of the members of the youth climate activist group said, “Our future is in our hands.”

Hamza Aamir, member of the group, spoke on the matter “Let’s practice what we preach: Unity, Faith and Discipline in solving the Climate Crisis.”