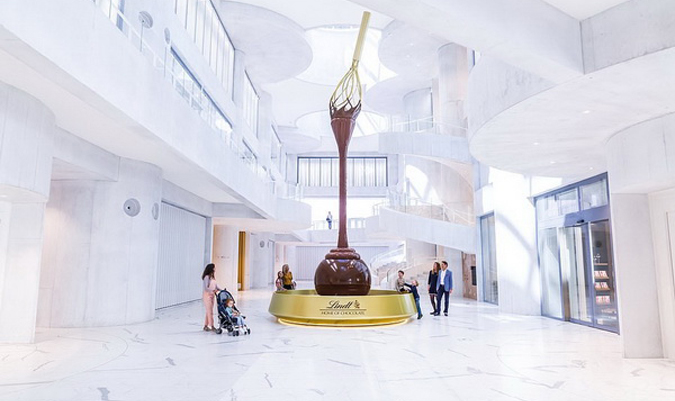 Called Lindt Home of Chocolate, it is dedicated to the Swiss chocolate brand – and features the world’s tallest free-standing chocolate fountain. It also boasts interactive exhibitions, the world’s largest Lindt shop and a chocolateria, where visitors can make their own sweet treats. Lindt Home of Chocolate, which cost 100million Swiss francs to build, opened earlier this week in Zurich, with the 30ft-high free-standing chocolate fountain officially unveiled by Swiss tennis player Roger Federer. The fountain, described as the ‘only one of its kind’, features 1,500kg of real chocolate flowing over a giant Lindor ball. Lindt says to make this possible, ‘pipes with a total length of 94 metres (308ft) were laid inside the chocolate fountain, which is exactly 9.3 metres (30.5ft) high’. The building’s interactive exhibition covers 1,500 square metres (16,145 square feet). Here, according to Lindt, visitors can learn about ‘the cultivation of cocoa, the history of chocolate, Swiss chocolate pioneers. and chocolate production’.