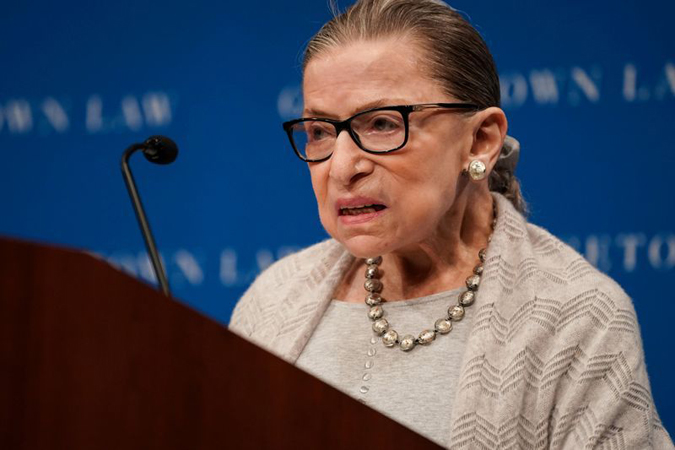 Ruth Bader Ginsburg became a heroine to the American left after overcoming entrenched sexism in the legal profession to ascend to the U.S. Supreme Court, where she championed gender equality and other liberal causes during 27 years on the bench.

Ginsburg, who died on Friday at age 87 of complications from pancreatic cancer, was a fierce advocate for women’s rights – winning major gender-discrimination cases before the Supreme Court – before being appointed to the top U.S. judicial body by Democratic President Bill Clinton in 1993. The diminutive dynamo became the court’s leading liberal voice.

Rising from a working-class family in New York City’s borough of Brooklyn, Ginsburg overcame hostility toward women in the male-dominated worlds of law school and the legal profession to become just the second woman ever to serve on the nine-member Supreme Court.

During her final years on the court, Ginsburg became something of a pop icon for American liberals, the subject of the 2018 feature film “On the Basis of Sex,” the 2018 Academy Award-nominated documentary “RBG” and sketches on the popular TV show “Saturday Night Live” – even inspiring an action figure.

Her small stature – she stood 5-foot, 1-inch tall (155 cm) – and frailty in later years belied an outsize persona and clout. Fans called her “The Notorious R.B.G.,” inspired by the late American rapper The Notorious B.I.G.

“I ask no favor for my sex. All I ask of our brethren is that they take their feet off our necks,” Ginsburg said in the documentary, summing up her lifelong work toward gender equality.

Ginsburg was a reliable vote in favor of liberal causes on the court on other issues as well including defending abortion rights, expanding gay rights, preserving the Obamacare healthcare law, and advancing the rights of racial minorities the poor and disenfranchised.

Her death gives Republican President Donald Trump the opportunity to make his third appointment to the court and expand its conservative majority to 6-3.

Ginsburg had experienced a series of health issues. In July she disclosed she had a recurrence of cancer after bouts with pancreatic cancer in 2019 and 2009. She also survived bouts with lung cancer in 2018 and colon cancer in 1999.

Even amid these health scares, she remained vigorous, seen in the 2018 documentary working out and lifting weights with a personal trainer while donning a blue sweatshirt emblazoned with the words “SUPER DIVA.”

President Jimmy Carter made Ginsburg a federal appellate judge in 1980 and Clinton elevated her to the Supreme Court 13 years later. She joined Justice Sandra Day O’Connor, who became the first woman justice in 1981, on the bench. During her tenure, two more women were named to the high court: Sonia Sotomayor and Elena Kagan.

When asked how many women there should be on the court, Ginsburg, with an impish smile, always gave the same answer: “Nine.”

Before joining the judiciary, Ginsburg was an intellectually fierce lawyer in New York and New Jersey who endured the death of her mother shortly before her high school graduation and went on to be elected to the law reviews at both Harvard and Columbia Law Schools. In the 1970s, she won five of six gender discrimination cases she argued before the Supreme Court, in fields as varied as military and Social Security benefits, property tax and rules governing jury duty.

By 2010, after the retirement of more senior liberals, she became leader of the court’s liberal wing.

Ginsburg’s most well-known majority opinion came in 1996 when the court invalidated the state-run Virginia Military Institute’s exclusion of women. Expansively interpreting the Constitution’s equality guarantee, Ginsburg wrote that while Virginia “serves the state’s sons, it makes no provision whatever for her daughters. That is not equal protection.”

She also became more outspoken in the media, at one point finding herself in a war of words with Trump after calling him a “faker” during the 2016 presidential campaign. Trump responded by saying “her mind is shot” and called on Ginsburg to quit. She later voiced regret over making her comments.

In 2018, Ginsburg voiced support for the #MeToo movement, which focused on women who had endured sexual assault or harassment, on the eve of a Senate hearing into allegations of sexual misconduct by Trump’s nominee to the court, Brett Kavanaugh.

Ginsburg and the other liberal justices had some major successes toward the end of her tenure, including the landmark 2015 ruling legalizing same-sex marriage nationwide, a 2016 decision upholding the use of race as a factor in university admissions, and rulings in 2016 and 2020 striking down abortion restrictions in Louisiana and Texas.

While Democratic President Barack Obama was in office, she rebuffed suggestions from some fellow liberals that she should have retired and let him replace her to ensure the ideological balance of the court did not shift further to the right.

A PASSION FOR OPERA

Ginsburg enjoyed a close friendship with conservative Justice Antonin Scalia despite their ideological differences. The former law professors traveled abroad together, shared a passion for opera and for decades spent New Year’s Eve at a dinner party in Ginsburg’s Watergate apartment in Washington.

Scalia, who died in 2016, said Ginsburg would be remembered for her work on women’s rights and attention to fair civil procedure.

“She is a tigress on civil procedure,” Scalia told Reuters. “She will take a lawyer who is making a ridiculous argument and just shake him like a dog with a bone. She has done more to shape the law in this field than any other justice on this court.”

Her affection for opera even led to the stage. In 2016, she received rousing ovations at the Kennedy Center in Washington when she performed a speaking role in Donizetti’s masterpiece “The Daughter of the Regiment.”

Ginsburg also could be distant. In conversations, Ginsburg often avoided eye contact and punctuated her thoughts with long pauses. During her confirmation hearings in 1993, she referred to a booklet her children kept when young called “Mommy Laughed,” suggesting such occurrences were rare.

Her opinions were sometimes influential even on the losing side of a case. In a 2007 sex-discrimination case, she protested the conservative majority’s decision against Lilly Ledbetter, a woman who said that after 19 years at a Goodyear Tire and Rubber Co plant in Alabama she made far less than men in the same work with similar tenure.

The court majority said such wage claims need to be filed within 180 days of the initial adverse action. Noting it took Ledbetter years to discover the salary disparity, Ginsburg said the court did not comprehend “the insidious way in which women can be victims of pay discrimination.”

She scored victories in the court’s term that ended in July in rulings that rejected Trump’s claim of sweeping presidential immunity from criminal investigation, recognized LGBT rights in the workplace, protected abortion rights and blocked Trump from rescinding an immigration program created by Obama.