President Young Doctors’ Association has warned the government for countrywide protests against Punjab government’s swift action against a doctor whose sexist and abusive remarks on a girl’s post went viral. 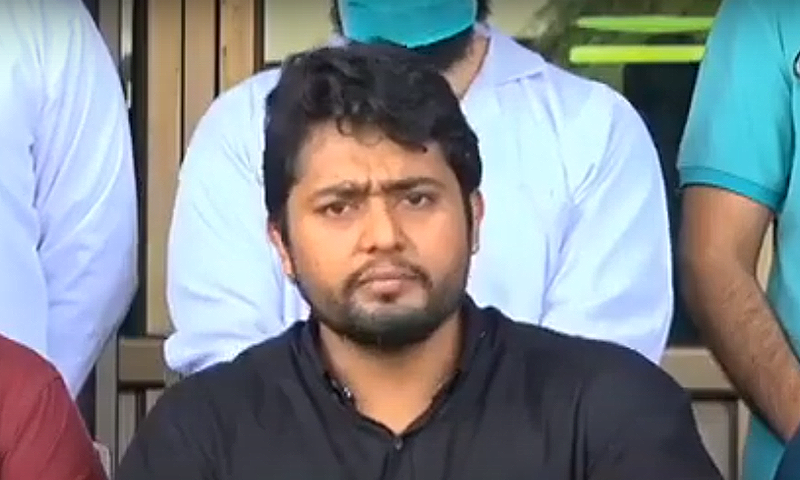 Dr. Omer Naseem who is a medical officer in Lahore General Hospital bombarded a female blogger’s tweet with abusive remarks. As his tweets went viral, twitterati urged the authorities to dismiss him from the position, after which the Punjab government took notice of the issue and the relevant department terminated him. Meanwhile, President YDA Dr Salman Haseeb jumped in to save his fellow and shame the girl. Calling her names, he challenged her to get him fired.

After the government terminated Naseem, Dr Salman Haseeb started to protest on his social media, tagging government officials and blaming them for running paid trends on social media. Later, YDA Lahore held a press conference in which Dr. Salman claimed that Azhar Mashwani, digital media focal person to CM Punjab, was behind the social media trends that criticized the two doctors for their ill-conduct. Urging human rights organizations and women rights advocates to support them, he stated that YDA is the biggest supporter of women’s rights in Pakistan and has always contributed to their movements for justice. He added that women make for a great majority not only of their organization, but also of the profession. Ironically, no woman was seen around during the press conference and the entire row consisted of male doctors.

While Dr. Salman Haseeb claims to be an advocate of women’s rights, it must not be ignored that right after the news about the motorway incident came out, he was seen calling it fake. In his earliest post after the incident, he suggested that it is an attempt to “gain popularity”, because “those who have ever traveled on the motorway know that it’s not possible”. However, as the news spread and the protest movement gained momentum, he announced to hold a sit-in demonstration in Lahore, against the rape case and CCPO’S “irresponsible” remarks.

The YDA Punjab head has pointed towards announcing a countrywide protest movement against the Punjab Health Department’s decision to terminate Dr. Omer Naseem. Calling CM Punjab as “General” Usman Buzdar, another senior of YDA criticized Punjab government and questioned their authority to get a doctor terminated over a social media trend.

Cyberspace appears to be divided in opinion over this issue. Reports floating on Twitter show that Dr. Salman was nominated in a murder FIR two years back, for being involved in a clash at Services Hospital Lahore where one of the patient’s caretakers succumbed to injuries after being beaten by a group of doctors. Moreover, people supporting him are criticizing the girl with allegations of treason and blasphemy for her ideological opinions on current affairs.