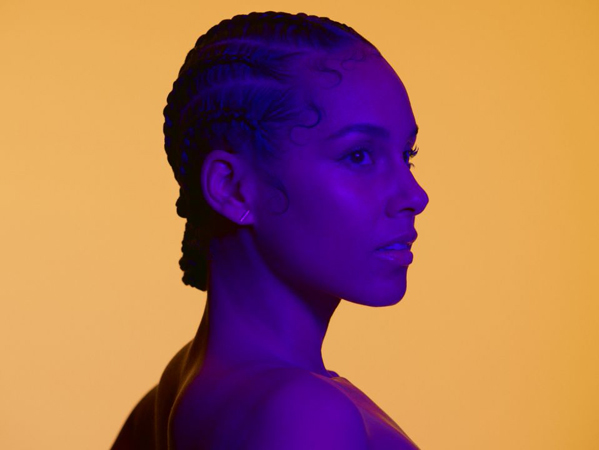 Today marks the highly-anticipated release of Alicia Keys’s seventh studio album, Alicia, which had originally been slated for a March 20 release but was pushed back due to the COVID-19 pandemic.

“It’s definitely been a 2020 nobody could have imagined,” Keys tells Yahoo Entertainment, “and the music itself has been ready for quite some time, and now that that it’s here, I couldn’t be more excited.”

It has been four years since the release of Keys’s 2016 album, Here, which debuted at No. 2 on the U.S. Billboard 200 and was her seventh No. 1 album on the U.S. Top Hip Hop/R&B Albums chart. Alicia looks to be poised for similar success. Keys debuted her first track from the album — the moving and atmospheric ballad “Show Me Love” with collaborator Miguel — way back in September 2019, and it was praised by critics. The song was accompanied by a stylistically innovative music video, directed by Cara Stricker and featuring Hollywood heavy hitters Zoe Saldana and Michael B. Jordan.

Keys’s second release from the album was the upbeat anthem “Underdog,” which went to No. 1 on the overall iTunes chart and became the most added song at Top 40 radio in the U.S. Keys performed the hit single during the 62nd Annual Grammy Awards, to which she returned as host after her well-received debut the previous year.

Further releases included the beautiful yet haunting track “Perfect Way to Die,” written in response to systemic racism and police brutality, and “So Done,” her slow, mellow duet with Grammy winner Khalid.

And while the majority of the songs on Alicia were written prior to the pandemic, Keys sees a serendipitous connection to the feelings and emotions many of us are experiencing during 2020.

“I’ve been fascinated to see that my music that I wrote, you know, however many months ago, or even a year ago or whatever it might be, has been specifically meant for these moments now,” she says. “Even with my single ‘Underdog,’ I always knew that that song was something that … would resonate with [people], but who would know how powerfully people … going through COVID and having to experience this uncertainty [would respond].”

The track “Perfect Way to Die” was written after the deaths of Michael Brown and Sandra Bland, but it’s unfortunate relevance has continued as a result of the deaths of George Floyd and Breonna Taylor — the latter of whom Keys helped create an awareness campaign for. “The thing that hurts the most about that song, ‘Perfect Way to Die,’ written by Sebastian Cole and myself, is I don’t see it becoming irrelevant, and that’s so horrible, so sad.”

On top of Khalid and Miguel, Alicia is filled to the brim with a who’s-who of talented collaborators. On “You Save Me,” Keys teams up with singer-songwriter Snoh Aalegra, whom Keys describes as “so beautiful on so many levels; it’s rare that you hear a voice that is so clean and so rich and can go so many places.”

Alicia also contains Keys’s first collaboration with Jill Scott, whom Keys named their song after. “I really love collaborating with Jill Scott. I called the song ‘Jill Scott’ because she’s just that iconic to me. I can’t believe we’ve never worked together before.”

And of course there’s Keys’s husband, hip-hop producer extraordinaire Swizz Beatz, who helps out on the track “Good Job,” a tribute to frontline workers. “In a way he’s not in my everyday creative space enough to be jaded by it. Since he’s outside of it, when he comes into it, he can think from a really fresh perspective,” she says. “So we found a really cool way to just flow. And then there’s also times when we’re working and I’m like, you know, I need a little space and he’s like, OK. So it’s just whatever works, and that’s what I think best friends can do.”

Through the range of moods and emotions we have seen so far from the songs on Alicia, and from her recently released candid autobiography More Myself: A Journey, it’s evident that Keys has become confident with displaying a wider spectrum of herself, something she hasn’t always done.

“I might be really comfortable in one part of my skin, but then these other parts, actually the vulnerable part, that’s a very new sensation for me. That’s a very new place. I’m feeling comfortable being uncomfortable, you know, and not trying to fix it or cover it up,” says Keys. “We’re putting [our lives] in these boxes that I think we actually internalize and don’t get a chance to break out of in so many ways. … This music is a representation of breaking out of those boxes and … those confined spaces and really exploring all of ourselves.”

Her 2020 World Tour has been rescheduled for 2021. Keys is ready to share the new music in person with the world, but she is being mindful of our current situation.

“Right now is the time to pay attention. So it might not be the time for [live concerts] this moment, but of course it’s going to come back, and we’re resilient. I cannot wait to be able to express the music [and] live energy in that last space with all the live instruments [and] the visual components and the emotional components. It’s incredible. So definitely when I get there, it’s going to be an explosion — an Alicia explosion!”