* Buzdar says permits for the builders, developers, architects and domestic as well as commercial construction will now be available with a single click 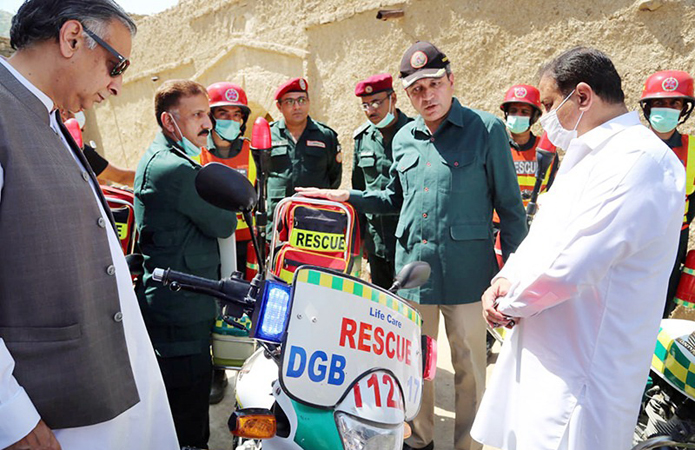 On the instructions of Punjab Chief Minister Usman Buzdar, an online service has been launched for the promotion of the construction sector.

Usman Buzdar said following the success of modern one-window system for obtaining construction-related NOCs and permits, the Online Platform has been launched. Permits for the builders, developers, architects and domestic as well as commercial construction will now be available with a single click. In order to create economic stability and ease of doing business in the province, the Punjab government has introduced E-Governance based Departmental Reforms.

Furthermore, the one-window platform has been activated under a strategy for the economic stability of the consecution sector after giving it the status of an industry. This One window platform established at e-khidmat centres is a milestone towards solving people problems besides builders, developers and architects’ issues related to the construction and transform Punjab into a hub of the construction business. Now, approval of the maps of residential and commercial projects, construction completion certificates, NOC for changing in land use and permits for the private societies all are being provided by e-khidmat centres.

He said that following the success of the one-window system, this system has been digitalized completely on the instructions of Prime Minister Pakistan. He said that online portal www.construct.fc.punjab.gov.pk/login has been launched with the collaboration of Punjab information & technology board. He said that the scope of one-window services has been extended to the doorstep of people. Now, people can get construction-related services through an online portal while sitting at homes.

He said that the Punjab government had introduced Approval Regime Punjab on an emergent basis and the concerned department and agencies have been made bound that NOCs and permission should be issued to the complete applications within a stipulated time. He said that 30 days have been fixed in this regime for the approval of the map and construction completion certificates, 45 days for the NOC of change in land use and 60 to 75 days have been fixed for the permits of the residential societies.

Earlier, months and years were required for the completion of the same task. This system is a historic initiative to digitally connect LDA, GDA, RDA, FDA, MDA, PHATA, Local Govt. (Metropolitan Corporation). The applicants will not have to contact different agencies for the permits of residential schemes and domestic construction. Usman Buzdar further maintained that the government is creating ease for doing business which will boost the investment besides generating new opportunities for employment. One-window system and the online portal is an important step to eradicate bribery culture and red-tapism, the CM concluded.

Meanwhile, Chief Minister Sardar Usman Buzdar inaugurated and laid the foundation stone of numerous development schemes during his visit to Fazla Kuch and Barthi in the tribal area of DG Khan on Friday. He laid the foundation stone of upgradation of BHU to the rural health centre in Fazla Kuch and inaugurated arazi record centre. He also announced to construct four small dams in Kohi Sulman area and inaugurated the schools’ solarisation program to convert 1066 DG Khan schools to solar energy.

The CM also laid the foundation of the sports stadium project, inaugurated rescue 1122 motorbike ambulance service for Koh-e-Suleman, water filtration plant, up-gradation of boys high school to higher secondary level and anti-polio drive. During his visit to Barthi, the CM launched rescue 1122 motorbike ambulance service and announced upgradation of government boys high school to higher secondary level. He also inaugurated an arazi record centre and conversion of 55 schools to solar energy. He announced that girls students have been provided with a van to solve their transport issue. Addressing the ceremony, the CM told that 75 per cent work of 35-km long Musakhel-Taunsa Road, costing Rs.2.75 billion, has been completed. This vital link will improve road connectivity between Punjab and Balochistan, he added. The government has expanded the development process to backward and remote areas. The localities, where past rulers never set foot, are enjoying the fruits of development today; he stated and announced to develop quality education institutions in tribal areas along with improving the healthcare facilities.