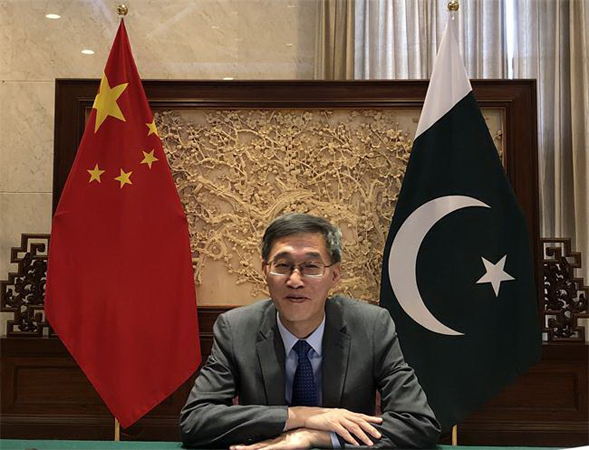 There are some superb achievements at the credit of Ambassador Yao, as he laid special focus on promoting economic diplomacy and ensuring smooth working of CPEC during his tenure.

Yao Jing, who had taken over his responsibility as Chinese Ambassador to Pakistan in December 2017, showed true love with the people of Pakistan, particularly during the outbreak of coronavirus. He along with the members of his team in the Chinese embassy made untiring efforts for timely availability of Chinese support to the virus-hit people. At the diplomatic front, he worked hard promoting China’s support to Pakistan on Kashmir issue. Time and again, Yao Jing effectively countered negative propaganda by Western and Indian lobby against the CPEC.

Speaking at the reception, with a sense of joy and pride, he termed his tenure in Pakistan as the most memorable. He expressed his confidence that the Sino-Pak relations will keep growing and the CPEC’s projects will greatly contribute to the well-being of the people. The Sino-Pak relations are not limited to CPEC, but their spectrum are quite wide, covering all areas of bilateral interests. The leadership of the two countries are committed to deepen their decades-old partnership, he added.

While praising high the support he had received from the government and the people of Pakistan, he noted that media had been on the forefront in supporting him for further strengthening the Sino-Pak diplomatic ties and socio-economic partnership.

It is worth mentioning that in the recent years, there was a considerable progress in promoting people-to-people exchanges, particularly enhancing the number of Pakistani students visiting China on scholarships.

Yao Jing will leave Pakistan, returning to the Foreign Ministry of China for having his next assignment.

Nong Rong, Head of Ethnic Affairs Commission of the Guangxi Zhuang Autonomous Region has been nominated as the new envoy.

Ambassador Yao Jing is already paying farewell calls to Pakistani dignitaries. Yao Jing has served in Pakistan thrice and stayed in Islamabad for 11 years in aggregate. He was going to leave a lot of fans in Pakistan.

According to the official website of Guangxi Zhuang Autonomous Region, the new appointed ambassador Nong Rong was born in September 1967. He is a Master’s in Business Administration (MBA) and holds a certification in International Business. Nong Rong once worked in the office of the Foreign Trade and Economic Cooperation Department, the ASEAN Countries and Hong Kong, Macao and Taiwan Divisions of the Department of Commerce of the Guangxi Zhuang Autonomous Region. He served as Assistant Secretary-General of the Secretariat of the China-ASEAN Expo.