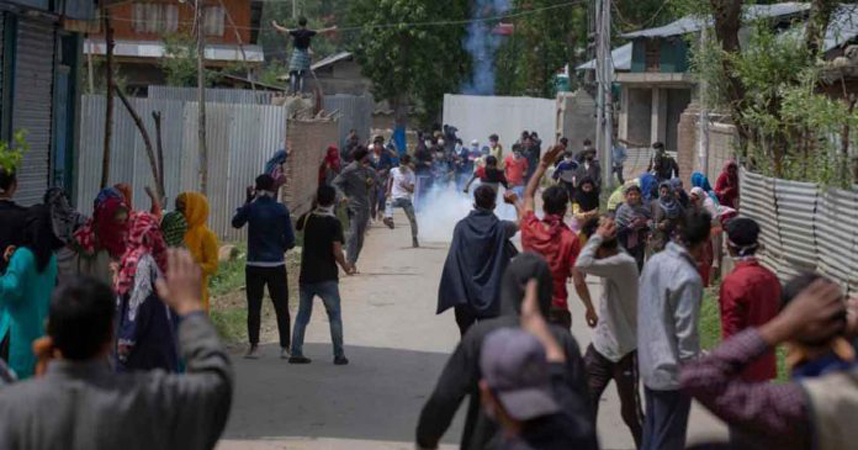 Hundreds of infuriated residents clashed with Indian security forces Thursday after four persons, including a woman, were martyred following an alleged firefight.

Counterinsurgency police and federal paramilitary forces surrounded the Batamaloo neighbourhood of Srinagar after midnight following a tip-off that men alleged to be armed militants were hiding inside a residential house, triggering an exchange of fire. Three men, believed to be locals, were martyred in the firefight that lasted several hours, police announced on Twitter. “One young woman also died during the encounter,” a police officer told AFP. “The woman was caught in the crossfire. Her death is unfortunate,” Director General of Police Dilbagh Singh told reporters. A paramilitary trooper was also injured during the firefight, Singh said.

As news of the deaths spread hundreds of residents took to the streets, throwing stones at government forces who fired tear gas and metal pellets. The crowd shouted slogans, such as ‘Long live Pakistan’ and ‘We want freedom’, according to an AFP photographer at the scene. No injuries were immediately reported from the clashes.

Armed encounters between freedom fighters and government forces are frequent in the territory, but rare in the capital city. The last such firefight occurred in June, and left three locals dead and 15 houses destroyed in the heart of Srinagar.

Thursday’s deaths came a day after similar protests in northeastern Kashmiri town of Sopore, where Irfan Ahmed Dar, 26, was found dead hours after he was detained by police. Dar’s family allege police tortured and killed him, later dumping his body in an open area.

Police however claim Dar was an overground associate of anti-India fighters and escaped from police custody before he was found dead. Dar’s body was not released to his family, and officers buried him in a graveyard reserved for slain rebels.

At least 192 Kashmiri freedom fighters have been martyred in violence across the disputed territory this year, along with 47 civilians.