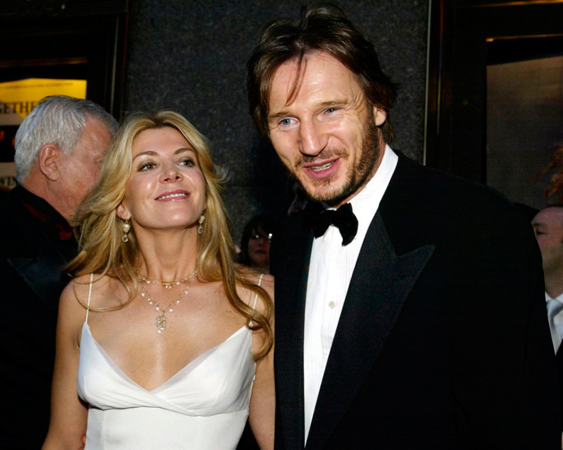 Liam Neeson opened up to Andy Cohen about working with son, Micheál, in the new movie Made in Italy and how it was a “cathartic” experience for them both. In the drama, Neeson and Micheál play a father and son who come together to grieve the loss of their wife/mother who died in a car accident years earlier. Neeson admitted the storyline hit “close to home.” In 2009, Neeson’s wife and Micheál’s mother, actress Natasha Richardson, tragically died in a skiing accident.

“I mean, the trailer made me cry, frankly, because it’s, it’s just very touching to see the two of you together,” Cohen said on his SiriusXM radio show.

“I’m very proud of him, Andy. I’m not gonna blow smoke he does have a presence,” Neeson replied on Andy Cohen Live. “Micheál he really does. And the subject matter is, was, is very close to home… losing my wife, Micheál, losing his mother, and that, that is part of the story of Made in Italy. It was quite cathartic in many ways for both of us.”

“I mean, there are so many obviously overlaps between your real life and this movie that it also seems like a painful place to go back to,” Cohen added. “Was it intense for you at all? Or was it — did it open up a lot of conversation between you and Micheál about Tash and about what happened?”

While Neeson said “it didn’t,” the 68-year-old action star admitted it felt as if “someone had just grabbed my gut and twisted it” when he read the script.

“It was quite scary,” Neeson shared. “It it really made my gut turn because it was so, as you say, it touched on something Micheál and I have both gone through — [are] still going through — 11 years after Natasha has died. And I thought, gosh, this would be fantastic if I could do it with Micheál.”

A few other young actors were suggested, but Neeson got the script to his son.

“I said, ‘Micheál, just read this.’ I didn’t tell him what it was about or anything. And he responded to it. He sort of looked at me after he read it. I looked at him and I said, ‘Look, what do you think? Do you want to, should we try and go through this together and see what happens?’ And he agreed,” he shared. “Yes of course it touches on very, very delicate stuff.”

Director James D’Arcy wrote the script based off of his experience losing his father at a young age.

“So we were all kind of in this together, you know?” Neeson added. “It was cathartic in lots of ways, it really was.”

Neeson and Richardson shared sons Micheál and Daniel, who were 13 and 12, respectively, at the time of her death. Two years ago, Micheál changed his last name from Neeson to Richardson to honor his mother.