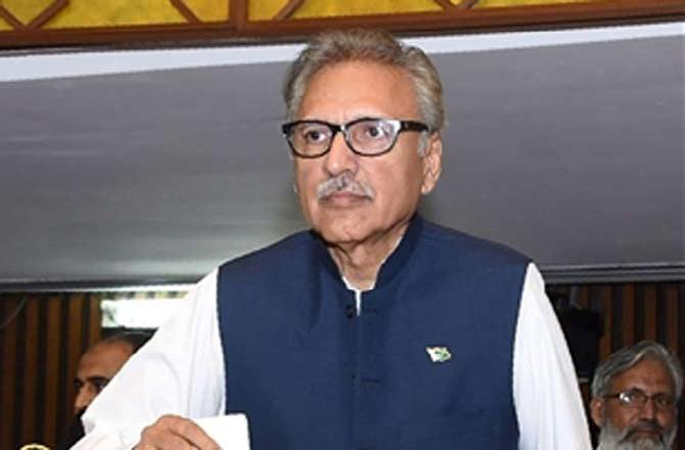 President Dr Arif Alvi on Tuesday said scope of hybrid and internet-based education had increased manifold as the world grappled COVID-19 and asked the nation to take hold of global opportunities by equipping themselves with knowledge compatible with contemporary market.

“As a silver lining amid hard times, the pandemic has pushed the nation to necessarily adapt to new ways in ensuring access to distance education, which must continue,” the President said while addressing at the convocation ceremony of Ghulam Ishaq Khan Institute of Engineering Sciences and Technology (GIKI), held here at the Aiwan-e-Sadr. In line with safety measures against COVID-19, the convocation was held with limited number of students comprising medal-winners only, while the rest of graduates witnessed the live ceremony telecast through web-link.

He said it was time for educational institutes to work on easing up distance-learning systems and asked GIKI and other universities to increase the content of e-learning in their syllabus.

He said for Pakistani nation, the areas of agriculture and medicine offered high prospects for education in Artificial Intelligence and computing to explore new vistas of opportunities.

He opposed the notion of ‘copyright education’, terming it a way to limit spread of knowledge and a kind of intellectual exploitation. The President recalled that from 2007 to 2013, he personally worked to support open-learning from the academic lectures of Harvard university, adding that “sharing of knowledge always ensured a balanced and well-groomed society”.

He gave reference of the book by Thomas Piketty titled ‘Capital and Ideology’, which he said focused on need to end elitist education that perpetuated inequality in society.

The education based on principles of social justice and equality can act as a catalyst in bringing positive change in society, he added. President Alvi regretted that the principles of the world were now being derived from the source of interests rather than morality as money had become a new religion.

He said Pakistan in all areas of life would uphold morality first, may it highlighting the case of Jammu and Kashmir at the United Nations.

“As nation, we have to work at personal, national and international levels to strengthen the values of morality and ethics,” he said.

In Pakistan, he said, education could be promoted through steps including lowering of fees, skill-based education and encouraging education compatible with contemporary market. Stressing importance of women’s education, President Alvi proposed introducing part-time facility for professional women through distant modes and also for differently-abled persons to utilize their skills in case they could not pursue careers.

“Pakistan will rise when it will cater to the needs of all segments including deprived and weak,” he said. He congratulated the GIKI graduates for their hard work and also the parents and teachers for their contribution in making the new generation productive citizens for society.

He advised them to never divert from the traditions of religion and culture that imbibed morality and decency.

President also gave away medals to graduates who achieved positions in various disciplines of Doctorate of Philosophy, Master of Science and Bachelor of Arts.

Earlier, President SOPREST (Society for the Promotion of Engineering Sciences and Technology) Farid Rehman urged upon students to become an inspiration for the world and make difference in the lives of others.

Rector Jehangir Bashar said Chinese tech company Huawei had set up its training centre at GIKI on Artificial Intelligence and intended its expansion as well.