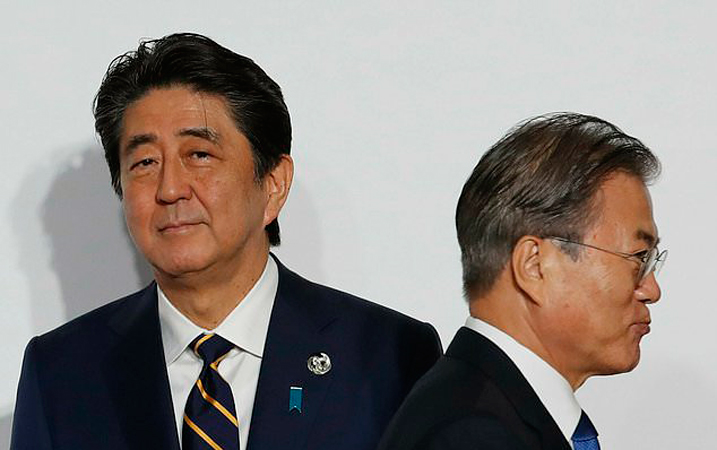 The rare praise came after years of diplomatic rows and testy confrontations between Abe and South Korean President Moon Jae-in, and only after the Japanese prime minister announced at the end of last month that he was stepping down after eight years in office because of ill health.

With Abe and Moon in charge, the relationship between the key US allies sank to new lows, with grievances over wartime history spilling over into trade and military issues. Japan’s political shakeup could be an opportunity for South Korea, which sees Abe´s departure as a chance to clear things up between the rivals.

Suga has also hinted at improving ties with South Korea.

“China and South Korea are neighbors, and even though there are difficult problems between us, I plan to pursue diplomacy that can allow us to always communicate and develop strategic relations with them, rather than choosing one or the other,” he said in a recent debate.

Good relations are crucial to both Japan and South Korea.

Despite their political conflicts, they remain closely connected economically and face similar challenges. Those include North Korea’s growing nuclear arsenal and a rising authoritarian superpower in China.

They also share long-term uncertainties about their alliances with a less-engaging United States, a shift highlighted by President Donald Trump´s “America first” approach and his complaints about the costs of stationing some 80,000 US troops in South Korea and Japan.

What remains unclear, however, is whether Abe´s exit will prove to be a diplomatic turning point. Mutual resentment runs deep and goes beyond individual politicians.

To South Koreans, Abe was less likable than even North Korean leader Kim Jong Un, according to a November Gallup Korea poll. Abe was often seen in South Korea as a right-wing nationalist intent on whitewashing Japanese colonialism and atrocities on the Korean Peninsula before the end of World War II. Placing the blame for bad relations entirely on Abe, however, overlooks the broad public support he won at home for a tough policy toward South Korea. There´s a widespread view in Japan that South Korea is violating international norms by repeatedly revisiting wartime issues that were supposed to have been settled, said Choi Eun-mi, a Japan expert at South Korea´s Asan Institute for Policy Studies.

“Abe´s resignation does offer a window for improved relations, but it´s unrealistic to expect significant changes,” she said.

There will be chances to resume stalled talks between the countries’ leaders, including a possible three-way summit with China that South Korea hopes to host in November. But it will take longer for Seoul and Tokyo to “rediscover their importance to each other” beyond their interdependence in security and cooperation matters with Washington, Choi said.

South Korea and Japan have long differed over history, but previous political tensions were softened by vibrant trade and exchanges of pop culture and tourism.

That wasn´t the case in 2019 when Japan´s move to place export controls on chemicals vital to South Korea´s semiconductor industry sparked an outpouring of national anger in South Korea and sweeping boycotts of Japanese products.

Moon accused Abe´s government of weaponizing trade to retaliate against South Korean Supreme Court rulings in 2018 that ordered Japanese companies to offer reparations to aging Korean plaintiffs who had been forced into wartime slave labor.

Seoul later threatened to terminate a military intelligence-sharing agreement with Tokyo, a major symbol of their trilateral security cooperation with Washington. It eventually backed off after being pressured by the Trump administration, which until then seemed content to let its allies escalate their feud in public.

South Korea and Japan´s strained relations have hurt their ability to deal with the unpredictable foreign policy of Trump, who has questioned the value of US alliances while raising tensions with China, a major trading partner for both, said Park Won-gon, a professor at South Korea´s Handong University. “Ideally, strong coordination between South Korea and Japan would help steer the Trump administration into pursuing its regional strategies within international norms and rules,” Park said.