Flour and sugar scandal probes will be taken to logical conclusion: NAB 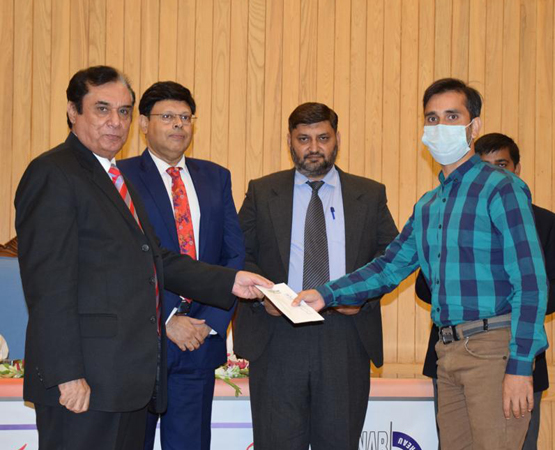 Justice (r) Javed Iqbal, Chairman National Accountability Bureau, has said that the name of the country had been placed in the grey list due to the billions of rupee corruption committee by those who claim they did not devour even a single penny.

Speaking at a cheque distribution among Modarba affectees, he said the plight of country including poverty, unemployment and absence of health facilities was the result of billions of rupee money laundering.

In the ceremony, NAB Rawalpindi distributed over Rs 240 million among 2,698 affectees. Chairman distributed cheques among the affectees. In Modarba case, the biggest dacoity in country’s history, the hard earned money of innocent people were plundered. Due to effective pursuation of NAB, Mufti Ehsan, the main accused in Modarba case had been awarded 10 years’ imprisonment and Rs 10 billion fine.

Quaid-e-Azam Muhammad Ali Jinnah while addressing the constituent assembly in 1947 had stated that bribery and nepotism the main ills being confronted to the country. Corruption is the root cause of all ills. There is a difference between street crimes and white collar crimes. NAB has so far recovered Rs466.069 billion and deposited in the national exchequer, whereas Rs 364 billion had been recovered and deposited into national exchequer in last three years, which is significant success of NAB.

NAB is becoming even better institution as its officers are working diligently and honestly. NAB was activated in 2017 after introducing reforms in it. Grant of bail to any accused is not logical conclusion of any case. The court has granted remand in 99.9 percent corruption cases to NAB. This is worth noting that courts grant remand after analyzing evidence. Money laundering of blillion of rupees was committed in name of Faloda wala and Chabri walas.NAB only conducts investigations of white collar crimes as some information has to be collected from abroad.

Flour and sugar scam probes would be taken to logical conclusion and nobody would be spared. He out rightly rejected the impression of lopsided accountability he said some people remained at helm of affairs for 30 years and some for only two years, they are busy in seeking bails. The atmosphere is changing fast.