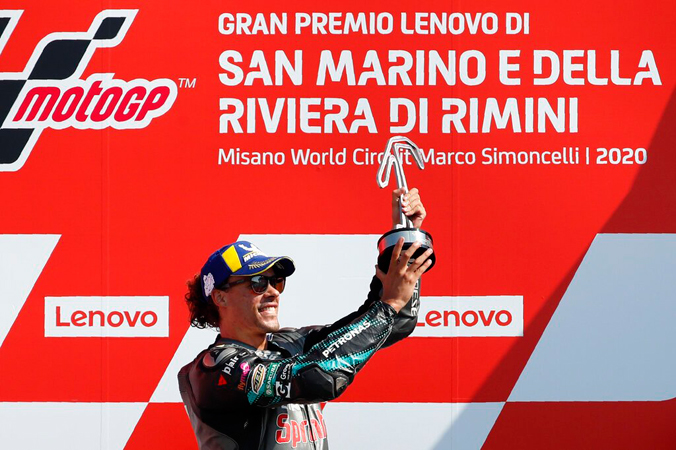 SAN MARINO: Petronas Yamaha’s Franco Morbidelli produced a dominant display to win the San Marino Grand Prix on Sunday after team mate Fabio Quartararo was forced to retire from the race at Misano. Italian Morbidelli, who started second on the grid, finished in 42 minutes, 2.272 seconds to comfortably beat Pramac Racing’s Francesco Bagnaia and secure his first MotoGP win. Spain’s Juan Mir edged out seven-times MotoGP champion Valentino Rossi to take the final podium place, much to the disappointment of fans who returned to the grandstands with social distancing rules amid the COVID-19 pandemic. The 25-year-old Morbidelli started fast to lead at the first corner from Rossi, who was chasing his 200th podium finish, and maintained his advantage throughout the race. Frenchman Quartararo, bidding for his third win of the season, crashed after losing control of his bike at turn four and he had to play catch up after dropping to 20th. Pole-sitter Maverick Vinales of Yamaha, who set an all-time lap record at the circuit on Saturday, could only finish sixth.