Farmers hold out at seized Mexican dam as tensions build 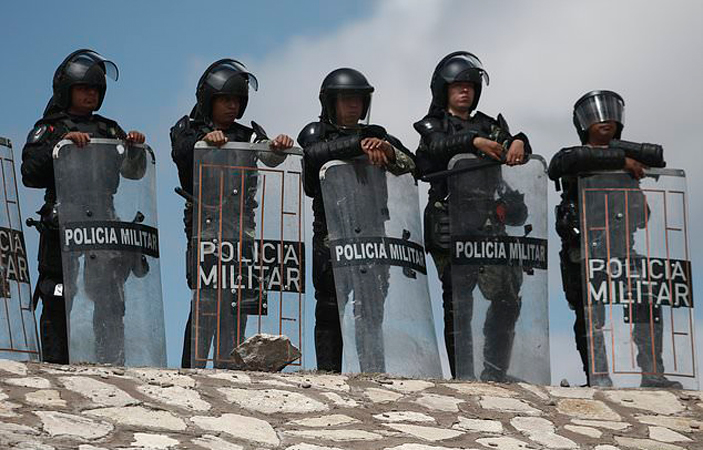 Hundreds of farmers continued to hold a remote dam in northern Mexico on Friday as time was running out for the country to catch up on payments and avoid breaching a 1944 water treaty with the United States.

Mexico’s National Water Commission warned that farmers who took over a dam in the border state of Chihuahua earlier this week damaged the facility’s controls, with just about six weeks to go before an Oct. 24 deadline for handing over a massive amount of water that Mexico owes the United States.

Asked if Mexico could still meet the deadline with one of its main dams seized by protesters who are blocking any further releases, Blanca Jimenez, the head of the National Water Commission, said that “the situation looks very complicated.”

The operations director of Mexico’s federal electricity commission, which uses the La Boquilla dam to generate power, said protesters had set fire to the generators’ controls and machine room.

Carlos Morales said the farmers doused the equipment with diesel fuel and apparently set it alight. He estimated damages at around $4.6 million and said it might take three months to repair.

Assistant Public Safety Secretary Ricardo Mejia said the demonstrators had shown an “attitude of insurrection” and that they – and opposition party legislators who supported them – could face charges equivalent to sedition, rioting and sabotage.

Mejia said the conflict could be benefiting drug cartels that operate in Chihuahua, by seeking to force the National Guard and other law enforcement forces out of the area. “This only benefits the criminals,” Mejia said.

The conflict not only set back Mexico’s rush to repay the US debt, but also threatened water releases for local farmers.

President Andrés Manuel López Obrador tried to explain to Mexicans Friday why the water must be released to the United States, which in return gives Mexico four times more water from the Colorado River farther west under the treaty.

Concern was building that if the farmers refuse to budge, the National Guard would be sent in again and there could be violence. The farmers say they’re worried about having enough water for their crops. When they took control of the dam Tuesday, they closed the valves that were releasing water from the reservoir.

Overnight, power to the La Boquilla dam was cut and there were reports that cellphone service there had also dropped, making activists suspect a move by authorities to evict them could be imminent.

López Obrador said he believes the protest is driven more by politics than water concerns. He said the farmers should be told, “There is no lack of water, they won´t run out of water, which is already 100 percent guaranteed for this cycle.”

He again expressed condolences for a woman killed Tuesday after National Guard troops had withdrawn from the dam following a clash with protesters. The National Guard has said four vehicles began following guardsmen who were transporting three detainees Tuesday night.

The National Guard said shots were fired from the vehicles and troops returned fire. A woman was killed and a man seriously wounded. The woman was buried Friday.

In late July, demonstrators in Chihuahua burned several government vehicles, blocked railway tracks and set afire a government office and highway tollbooths to protest the release of water from local dams to pay the US

The expansion of water-hungry crops has meant that Mexico has used 71% of the northward-flowing Conchos River, while under the treaty it should use only 62% of the water, letting the rest flow into the Rio Bravo, also known as the Rio Grande, for use by US farmers. The amounts are determined over five-year cycles; the current cycle ends in October.

In the past, Mexico has delayed payments, hoping that periodic tropical storms from the Gulf of Mexico would create occasional windfalls of water. But while Hurricane Hanna made landfall in Texas in July, the storm´s rains did not reach far enough inland to fill dams in Chihuahua.

The US section of the International Boundary and Water Commission, which oversees compliance with the treaty, said in a statement earlier this week that “what happened at Boquilla Dam is unfortunate for everyone involved.”

According to its accounting, Mexico still owes 318,498 acre-feet (392.6 million cubic meters) to the United States that must be paid by Oct. 24. That leave almost an entire year´s normal water contribution to be paid in about a month and a half. The water commission said that “at this point, it would be premature to say what would happen if Mexico ends the current cycle with a shortfall.”