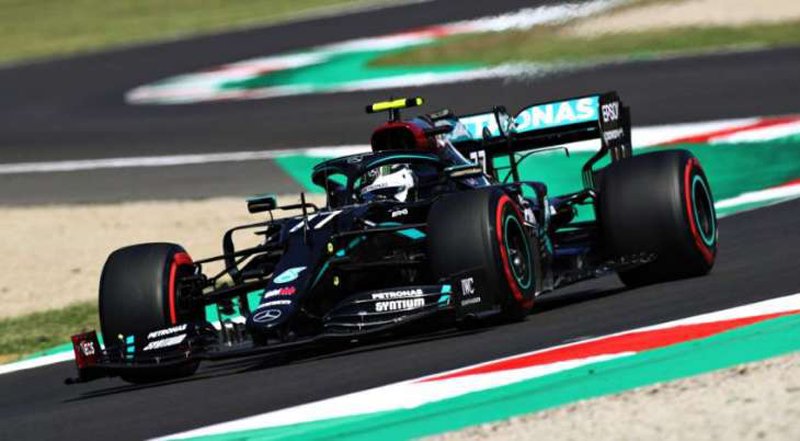 MUGELLO: Valtteri Bottas completed a clean sweep of Tuscan Grand Prix practice domination when he topped the times for Mercedes in the final session ahead of qualifying on Saturday (Sep 12). The Finn, who was fastest in both practice sessions on Friday, was quickest ahead of Red Bull’s Max Verstappen by 0.017 seconds with his Mercedes team-mate and series leader Lewis Hamilton third, just 0.083 off the pace. Bottas’s best lap was one minute and 16.530 seconds, setting a record for the spectacular Ferrari-owned Mugello circuit being used for Formula One for the first time as it hosts the Italian team’s 1000th race celebrations.

Lance Stroll was fourth for Racing Point ahead of last weekend’s Monza winner Pierre Gasly of Alpha Tauri and his Racing Point team-mate Sergio Perez, who is due to be replaced next year, when the team is renamed as Aston Martin, by four-time champion Sebastian Vettel. Charles Leclerc was seventh in the leading retro ‘burgundy’ red Ferrari ahead of Alex Albon in the second Red Bull, Daniil Kvyat in the second Alpha Tauri and Romain Grosjean of Haas. Vettel in the second Ferrari was 18th as the team sought to deliver a strong recovery after two pointless weekends at Spa-Francorchamps and Monza.

On a beautiful morning in the Tuscan hills, the air temperature was 27 degrees Celsius and the track was 40 as final practice began, the Haas, McLaren and Alpha Tauri teams leading the way with prompt installation laps. Bottas was soon out on softs and clocked the first serious timed lap in 1:17.437 as he strove to carry his “fastest on Friday” form into a meaningful Saturday and a bid to take pole position. After 24 minutes, however, Hamilton trimmed the best time by just 0.022 seconds to top Bottas before Verstappen, on mediums, clocked 1:17.116 to take control for Red Bull, the Dutchman exploiting his car’s handling on the high-speed corners of the picturesque circuit. In response, on fresh softs, Bottas returned to the top in 1:16.530 with a lap that Hamilton could not match as he took second, 0.083 off the Finn’s speed.

It was clear a tight scrap between the two black arrows drivers was in prospect for qualifying later on Saturday with Verstappen also in the mix. Ferrari’s form continued to improve after their encouraging runs on Friday – Leclerc claiming a top five slot within a second of the leading pace to offer some hope on the weekend when the team celebrate their 1000th F1 race entry.

Vettel, who leaves Ferrari for Aston Martin at the end of the year, briefly rose to seventh before falling back to 15th with six minutes remaining, 1.6 seconds off the pace. In the final flurry of low-fuel runs, to simulate qualifying, Verstappen improved to divide the two Mercedes men.