Despite loss, Lightning have blueprint to play without Point 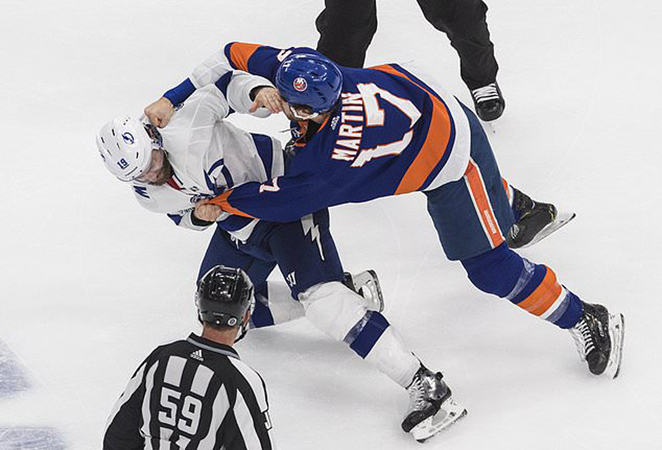 EDMONTON: Brayden Point didn’t walk out of the tunnel to the ice with his Tampa Bay Lightning teammates for Game 3 of the Eastern Conference final, and there’s no certainty he’ll do so in Game 4.

Sure, Tampa Bay could use its leading scorer and playoff MVP front-runner after losing to the New York Islanders to cut its series lead to 2-1. But in their 5-3 loss, the Lightning may have found a blueprint on how to play without Point, just as they’ve gotten to this point without captain Steven Stamkos.

Without Point, Stamkos and suspended winger Alex Killorn, coach Jon Cooper stuck with his patented 11 forwards/seven defensemen lineup and the Lightning started hitting the Islanders more and got offensive contributions from all over their lineup. That will need to continue if Point remains unavailable because of injury.

“Guys got to take more responsibility,” defenseman Victor Hedman said. “You´re not going to replace those players, but I think guys really stepped up and took advantage of maybe more ice time and playing in probably more offensive situations.”

Shutdown center Anthony Cirelli looked the part taking over the No. 1 center spot, Tyler Johnson scored a goal reminiscent of his 2015 Stanley Cup Final run and reigning MVP Nikita Kucherov was sharp in the 22 minutes of ice time that have become the norm for him. Maybe Point’s ability to finish would have tipped the balance, but Cooper thought the Lightning were their “own worst enemy” and gift-wrapped the game for the Islanders.

“I don´t think they outplayed us,” said top-line winger Ondrej Palat, who scored his seventh postseason goal. “I thought we played a good enough game to win.”

Hedman and Cooper saw plenty of positives, too, including the physicality. The Lightning outhit the Islanders 62-44, matching a tough opponent with some extra sandpaper.

“We´re not shy to go to the dirty areas and be physical,” Hedman said. “That´s always part of your game plan, to make it hard on the opponents. It wasn’t really that we talked too much about it before the game. We just know that´s part of our DNA.”

The Lightning’s DNA is more speed and skill than brute strength, and they’re more imposing in that way when they have Point, who is the top scorer left in the playoffs. They won Game 2 despite him leaving early in the second period and not returning, and players have committed to remaining consistent no matter the lineup changes. “As forwards, you don’t want to change your game,” winger Blake Coleman said earlier this week. “You don’t want to try to do too much just because you´re missing Pointer. Obviously he gives us a lot of offense and lot of punch, but everybody´s got a role on this team and you don´t want to stray from it just because you´re missing a guy.”

Of course, holes need to be filled. Mitchell Stephens and Carter Verhaeghe entered the lineup, while Johnson and Cirelli took on bigger roles. Johnson ended a seven-game goal drought by deflecting a puck past goaltender Semyon Varlamov and said it was nice to contribute. Cirelli played between Palat and Kucherov on the first line and perhaps did the most to make up for Point’s absence.