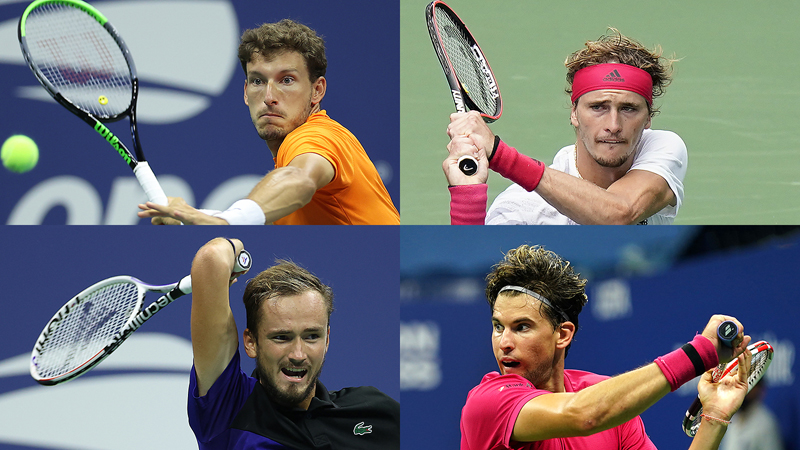 NEW YORK: The perennial challenge for the men’s field at any Grand Slam has been taking down one of the dominant ‘Big Three’, but for those left at this year’s U.S. Open, it is about tamping down the pressure of playing a semi-final shorn of tennis’ titans. The aggressive, nothing-to-lose mentality a player might adopt as he gazes across the net at Rafa Nadal, Roger Federer or world number one Novak Djokovic no longer applies at Flushing Meadows. With Nadal and Federer both skipping the tournament, Djokovic’s sensational exit on Sunday after hitting a line judge in the throat with a ball opened up the field for a younger cohort of players. Germany’s Alexander Zverev faces Spain’s Pablo Carreno Busta and Austrian Dominic Thiem takes on Russia’s Daniil Medvedev in their respective last-four encounters with all seeking to secure a maiden Grand Slam singles title. “The Novak news shocked us all, and obviously for us younger guys, we see that as a massive opportunity, but we have to put our head down and just do our job and focus on ourselves,” said fifth-seed Zverev, who plays Carreno Busta on Friday. Second seed Thiem, who was beaten by world number one Djokovic in this year’s Australian Open final, and third seed Medvedev, who lost to Nadal in last year’s U.S. Open decider, will look to tame the jitters that come with added expectation when they face off on Friday.

“I don’t think any of the players have been in this situation often. Maybe Dominic (Thiem) and Daniil (Medvedev) more often,” said Canadian 12th seed Denis Shapovalov, whose own bid for a first Grand Slam title ended at the hands of Carreno Busta in the quarter-finals. “There’s a lot of dark horses out there. It’s anybody’s slam. It’s very exciting for tennis. It’s definitely causing a lot of nervous matches,” he added. Thiem said he is not underestimating the challenges presented by the remaining competitors. “There is no Roger, Rafa or Novak but there is Daniil, Sascha (Zverev) and Pablo now. They are three amazing players. Every single one of us deserves the first major title. Everyone will give it all and that’s all that is on the mind,” said Thiem. “Once we step on the court the other three (Big Three) are forgotten anyway.”