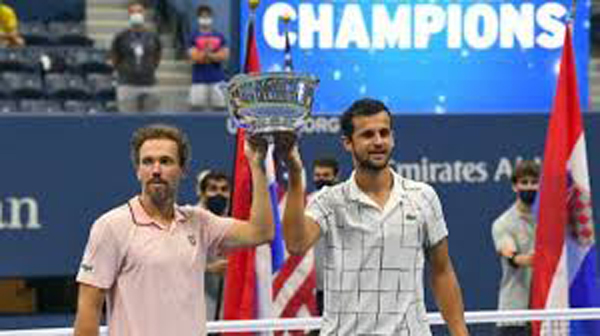 NEW YORK: Croatia’s Mate Pavic and Brazil’s Bruno Soares captured the US Open men’s doubles crown with a 7-5 6-3 win over eighth seeds Wesley Koolhof of the Netherlands and Nikola Mektic of Croatia on Thursday. In their first Grand Slam men’s doubles final as a team, Pavic did damage with his powerful serve while Soares did well to force their opponents into difficult shots and they sealed the win when Mektic sent a backhand volley into the net. “That’s what we practise for and that’s what we were tying to do during those five months off, working for this moment,” Soares, who won the Australian Open and U.S. Open men’s doubles titles in 2016 with Jamie Murray, said during the trophy presentation. A key moment in the match came with Mektic serving at 5-6 15-40 in the first set when Koolhof missed a forehand volley that would have forced a tiebreak. Pavic and Soares went on to grab the next three points to close out the set. The Croatian-Brazilian duo’s road to the final was far from routine as they rallied from a break down in the third set of their first-round clash and then in the second round had to stand tall as their opponents tried to serve for the match.