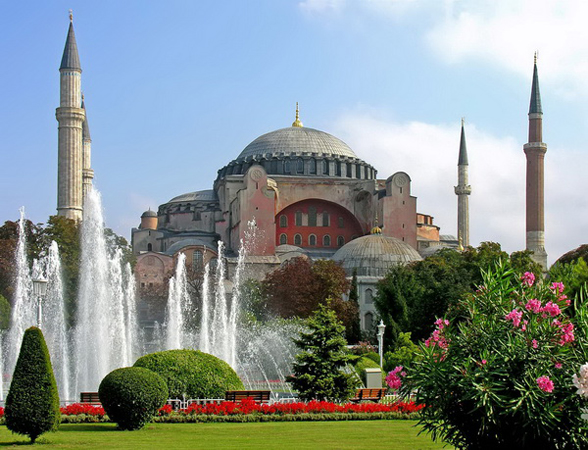 Hagia Sophia Mosque in Istanbul, Turkey has been a site of major religious, political and artistic events in world history.

Recently, it has been established as receiving Sunni Muslim worshippers for the first time since 1931. The celebrations of the conquest of Istanbul on May 29 opened doors to convert Hagia Sophia into a mosque

Originally Hagia Sophia has been a Byzantine church built in the sixth century and a Catholic church in the 13th century. It was converted into a mosque in 1453. It had been symbolic of an Ottoman conquest of Istanbul by Mehmed II, who had been a conqueror.

There had been a clash of opinion about conversion of Hagia Sophia’s building from a museum to a mosque. Several secular Turkish residents and global community members have considered this conversion quite unrealistic. Besides, several Turkish dwellers favoured this transformation.

The building has a magnificent architecture and is built by an Ottoman architect named as Mimar Sinan. The architect made this building unique by adding minarets hence ensuring its status as a monument, which is symbolic of both Christianity and Sunni Islam. The foundation of the building had been strong and it survived numerous earthquakes due to excessive care taken of it by Ottoman sultans. The building presents a square view, and usually three aisles split by columns are seen hung above galleries.

There had been a clash of opinion about conversion of Hagia Sophia’s building from a museum to a mosque. Several secular Turkish residents and global community members have considered this conversion quite unrealistic

Hagia Sophia is also deemed to be a UNESCO’s World Heritage Site, which has been included in historic areas of Istanbul in 1985. It has been approved as a site, which is culturally prestigious for the territory where it is located.

The reforms of Turkey’s first President, Mustafa Kemal Ataturk which emphasized the political establishment of the democratic and a secular state led to the closure of Hagia Sophia’s Mosque in 1931. Afterwards, it was converted into a museum in 1934, which symbolizes a move towards secularism. Political and religious debates have arisen all this time to focus upon who actually owns the Hagia Sophia Mosque. It has lately been in July 2020 that Turkish President, Tayyip Erdogan entered a presidential order to open Hagia Sophia as a place of worship and prayer. Its conversion to a mosque holds controversial debate as to whether Hagia Sophia really belongs to Turkey or the whole world as it has been labelled as a world heritage site. It also stays a controversial point as to whether Turkish government has a right to mess up with its legacy of being a museum in the past.

Hagia Sophia is labelled as a symbol of a modern Turkish nation where Turkish flags and symbols of Sunni Islam are interconnected. This conversion to a mosque is indeed challenging for a multi-religious and multi-ideological society of Turkey. Therefore, an expert opinion has viewed it as a division between eastern and western world whereby Christian and secular world express disapproval for this conversion and Sunni Muslims offer acceptance. There are growing concerns that Hagia Sophia should never be converted into a museum considering the fragile religious stability of Turkey.