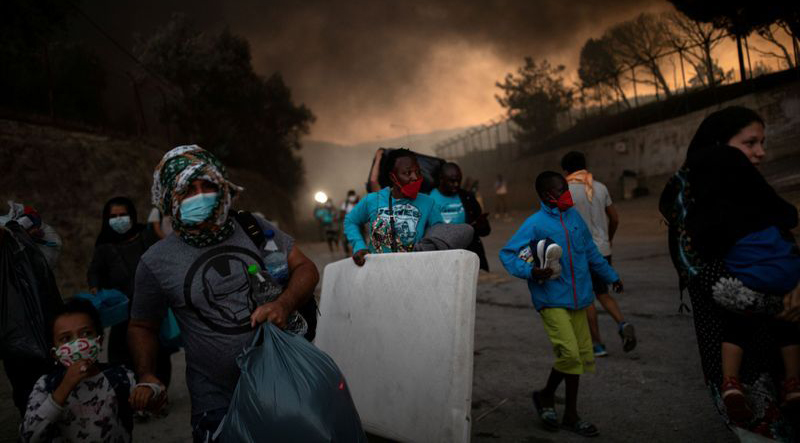 Thousands of migrants slept rough on the Greek island of Lesbos on Thursday after a blaze razed their makeshift camp to the ground, leaving them with nowhere to go.

Greek authorities transferred more than 400 unaccompanied children and teenagers to the mainland in the early hours of Thursday on three chartered flights.

But many more people remained stuck in Lesbos without homes or shelter. Families slept on roadsides and in supermarket parking lots and fields across the island, which was at the forefront of the European migrant crisis in 2015-2016.

About 12,500 people had lived in the Moria camp, already notorious for its poor living conditions. Tuesday night’s inferno reduced it to a mass of smouldering steel and melted tent tarpaulin.

A second fire broke out on Wednesday night, destroying whatever was left. Police reinforcements were brought in to prevent migrants from reaching the island’s main town of Mytilene, confining them to fields and roadsides.

An eight-year-old Congolese girl Valencia, who was barefoot, gestured to a Reuters reporter that she was hungry and asked for a biscuit.

“Our home burned, my shoes burned, we don’t have food, no water,” she said.

Both she and her mother Natzy Malala, 30, who has a newborn infant, slept on the side of the road.

“There is no food, no milk for the baby,” Natzy Malala said.

“The children have been taken to safe facilities in northern Greece where they will stay temporarily, while the programme of their relocation to other EU countries is ongoing,” it said.

More than 800 unaccompanied minors have been relocated to EU countries so far under the programme, it said. The migration ministry said it would take “all necessary steps” to ensure that vulnerable groups and families had shelter, but these were expected to be met with stiff resistance from local residents.

Authorities were already at loggerheads with Lesbos residents over plans to replace Moria with a closed reception centre, which the residents fear would mean thousands of asylum seekers remaining their permanently.

Municipalities were at odds over the handling of the situation, said Costas Moutzouris, governor of the Northern Aegean.

“There is no decision. It’s up in the air,” he told Reuters. A government official who declined to be named said that sheltering migrants on boats was not a safe solution and was sending the wrong message to migrants who would want to leave Lesbos.

Authorities are investigating whether Tuesday night’s fires were started deliberately after COVID-19 tests led to the isolation of 35 refugees.