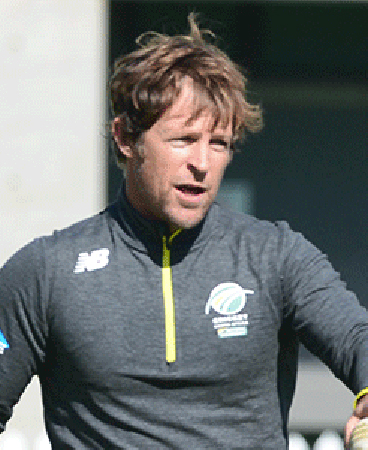 DUBAI: Jonty Rhodes has signed up as head coach of the Sweden national side. According to a statement from the Swedish Cricket Federation, the move is part of the board’s broader plans to invest in junior cricket and high performance in the country. The statement also said cricket was the second fastest growing sport in Sweden seeing a 300% increase in participation over the past two years. “I am really excited to relocate to Sweden with my family and work together with the Swedish Cricket community. This opportunity has come at a perfect time and I am grateful to be able to invest my energies in a completely new environment. I can’t wait to get started,” Rhodes was quoted as saying by swedishcricket.org. Rhodes, currently serving as the fielding coach of Kings XI Punjab in the IPL in the UAE, will join his new side in November and be based in Stockholm.

“Our growth targets and key areas are directed toward junior cricket and high performance. Jonty will play a pivotal role in lifting our players as well as assisting in securing quality coaching framework for the future sustainability of the game,” Benn Harradine, sports director of the Swedish Cricket Federation, said. “I am delighted to have him as part of our small and ambitious team.” Rhodes’ move means that, for now, he is lost to his own country’s cricket board at a time when CSA has appointed a wide variety of coaches across the national structures. Recently, he had expressed concerns about the mounting administrative chaos in South Africa, a factor he felt was responsible for the results that the national team produced on the field. “The same mistakes are being made and there is not much accountability. It saddens me,” Rhodes said. “It does impact on-field performance. Even though we have some great players, we have been lacking consistency in performance because of inconsistency off the field.” He was also vocal about the racial issues that continue to haunt his country, pointing out the difficulties that black children faced while growing up in South Africa.