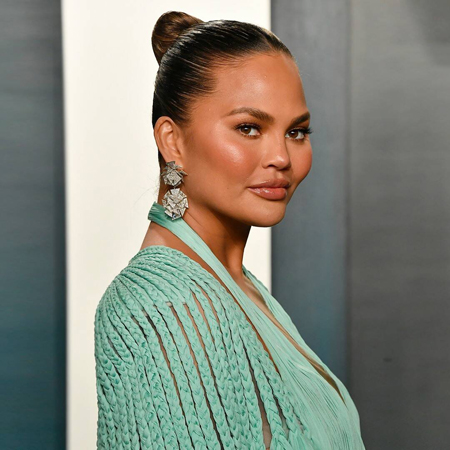 Chrissy Teigen is learning to “live” with the incessant attacks from conspiracy theorists. For years now, the mother of two’s social media accounts have been inundated with unsubstantiated allegations of sex trafficking and ties to convicted sex offender Jeffrey Epstein. Individuals will often accuse her and husband John Legend of pedophilia or leave a string of pizza emojis in the comments section of her Instagram, a reference to the discredited “Pizzagate” theory, which gained popularity in part because of the far-right conspiracy group QAnon.

Chrissy and John have repeatedly stated that there is no truth to these claims. In addition, authorities have never formally accused the couple of wrongdoing. However, the speculation continues.

In July, Chrissy said she deleted 60,000 tweets in an attempt to safeguard her loved ones, writing, “I’m worried for my family.”

Now, the star reveals on Instagram that it reached a point where she stopped leaving “cute” comments on her friend’s social media posts, because she believed “they’d be flooded with pizzagate insanity.”

“I have lived a life begging for people to like me and think I’m cool and funny and their friend, and bam, it felt like everyone f–king hated me. I couldn’t do anything right, say anything right,” she claims, adding, “My own fan pages wrote me, asking if I still wanted to be talked about even though the comments would be super hurtful.”

In July, Chrissy said she deleted 60,000 tweets in an attempt to safeguard her loved ones, writing, ‘I’m worried for my family’

In addition to this conflict, which she describes as her “deep dark internet/real life days,” the star was recovering from a breast reduction surgery that posed a potential threat to her pregnancy. “I was so so so scared the aggression on my body took a toll on the baby and just mentally came to terms with it ‘not working out’. It had never worked out naturally before so for sure it wouldn’t now!” Chrissy shares.

She adds that in the grand scheme of things, “There is so much worse in the world, but man, aside from the world sucking, my little world sucked too.”

But now, after receiving “support” from fans in recent months, the 34-year-old says, “I guess I’ve come to terms with the fact not everyone is going to like me, and even though I still VERY MUCH DO NOT LIKE THAT, i can live with it.”

After all, the Cravings cookbook author has a lot to look forward to. She and her family will be welcoming a family member in the coming months, which they’ve already started to prepare for. As the mom said in the caption of her latest ultrasound appointment, “all is well.”