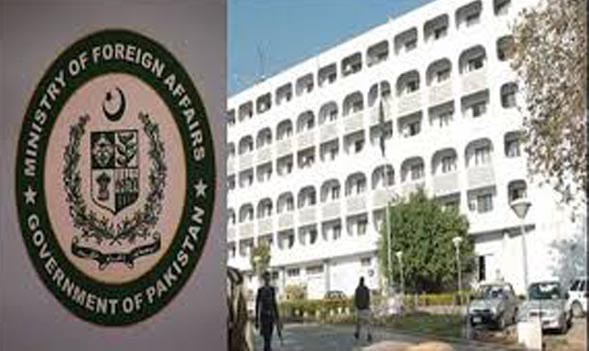 ISLAMABAD: Pakistan on Thursday categorically dismissed any option to amend local laws on India’s demand to allow its own lawyers to fight the case of spy Kulbhushan Jadhav in Pakistani courts.
“Pakistan will never accept any ‘unreasonable demand’ by India on Jadhav case,” Foreign Office Spokesperson Zahid Hafeez Chaudhri said at a weekly press briefing here at Ministry of Foreign Affairs, when asked if Pakistan was considering any relaxation in laws to accommodate the Indian demands.

The spokesperson said there was no other option for India but to “cooperate with Pakistani courts”, which only permitted appearance of locally registered lawyers before the bench.
The case of Indian serving navy commander is under trial at the Islamabad High Court after the International Court of Justice (ICJ) in its verdict asked Pakistan for a “review and reconsideration” of death sentence announced by the military court.

“Pakistan remains committed to the implementation of IHC judgment,” he said.
Chaudhri confirmed that Pakistan had received a reply from India in response to the offer for a third consular on recommendation of the IHC early this month. “However unfortunately, India still appears evasive on the issue,” he said.

The FO spokesperson said Pakistan had already given “uninterrupted and unimpeded” consular access to Jadhav and was ready to extend the same in future as well.

The FO spokesperson strongly condemned the recent statement by Indian Chief of Defence Staff Gen Bipin Rawat, saying Pakistan could suffer “heavy losses for any misadventure if it took advantage of Ladakh situation”.
“Such belligerent statements from senior military leadership of India provide insight into how the BJP-RSS mindset – a dangerous mix of extremist ideology, hegemonic ambitions and obsession with Pakistan, has permeated Indian state institutions,” he said.

Zahid Chaudhri said India’s defence capabilities had been “embarrassingly exposed to the world not far ago.
“Unfortunately, the Indian government in response to any geopolitical, economic or military setback, instead of learning from its mistakes and instituting course correction, simply doubles down on its miscalculation and bellicose rhetoric.”

He said rather than “whipping up anti-Pakistan sentiments”, the Indian leadership must focus on peaceful resolution of outstanding disputes, particularly the Jammu and Kashmir dispute as per international law and the relevant United Nations Security Council resolutions.

“As for Pakistan and China cooperation, we are ‘all-weather strategic cooperative partners’ and remain committed to promoting peace, stability and development in the region,” he said.

On India’s demand to the United Nations Security Council (UNSC) to remove the Jammu and Kashmir dispute from the Council’s agenda, the spokesperson said the “ill-conceived Indian move” ahead of the 75th session of the UN General Assembly later in the month was another desperate but pointless attempt by the Bharatiya Janata Party’s (BJP) regime to find an escape from its global condemnation.

He said by denying the Kashmiris their inherent and inalienable right to self-determination as enshrined in the UN Security Council resolutions, India was in continued violation of its international obligations.
The FO spokesperson said in attempts to divert the world attention from its egregious human rights violations in the Indian Illegally Occupied Jammu and Kashmir, India continued to resort to indiscriminate and unprovoked firing along the Line of Control, targeting innocent civilians.

During the current year alone, India had committed 2,199 ceasefire violations to date, resulting in 17 martyrdom and serious injuries to 171 civilians, including women and children, he added.

To a question regarding delay in the intra-Afghan dialogue, the FO spokesperson said Pakistan had consistently maintained that the Afghan peace process had reached a critical stage and required efforts by all the stakeholders.
Only a political settlement in Afghanistan would lead to peace and stability in the country, he added.
He condemned the attack on Afghan vice president, saying Pakistan was against terrorism in all its forms and manifestations.
As regards the visit of Chinese President Xi Jinping to Pakistan, he said the Foreign Office was in touch with the Government of China to sort out the details.

About the mysterious killing of 11 Pakistani Hindu nationals in India where a family member accused involvement of Indian intelligence agency RAW, the spokesperson said Pakistan had asked India to share the circumstances of death and provide a copy of the FIR (First Information Report).

He also called upon India to carry out an independent inquiry into the incident.