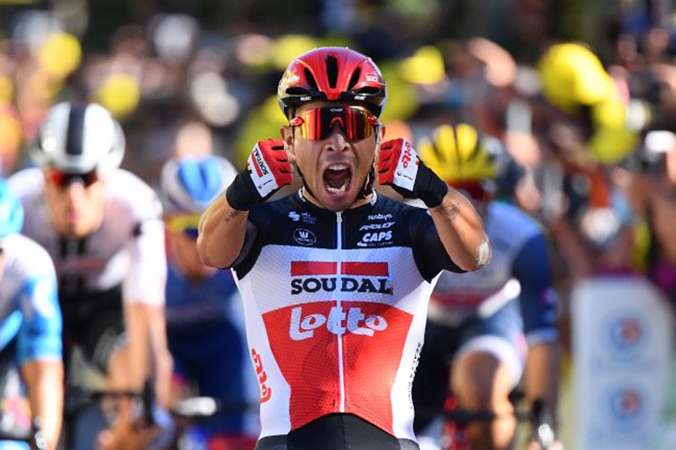 POITIERS: Australia’s Caleb Ewan won stage 11 of the Tour de France on Wednesday by the narrowest of margins after a frantic bunch sprint was decided on a photo-finish, as Primoz Roglic retained the overall lead. The diminutive Lotto Soudal rider who visualises various sprint scenarios on the morning of the race edged Tuesday’s stage winner Sam Bennett, who retains the green jersey and peloton superstar Peter Sagan. Ewan won three stages in 2019 and now says he will go for a third on this Tour too by crossing the Alps to try his luck on the iconic Tour de France climax on the cobbles of the Champs Elysees. “Once you get one you want two, and now I have two I want a third on the Champs Elysees in Paris,” said the diminutive sprinter who also won stage three at Sisteron. Ewan is a wily sprinter, known for cool-headed analysis in the heat of the action, and he now has five Tour wins in total.

“I was really close to the front, I was more forward than I wanted to be, but I dropped back into the bunch to watch,” the 26-year-old said. “I just kept calm and waited for the right gap to open. I didn’t know if I’d won because I threw the bike and was looking down. “But sometimes you can just feel it,” he added. His win is doubly impressive as his team have already lost three riders. “We no longer have the men to protect me, but I don’t mind, they got me there,” said the affable and popular rider. The finish line at the Tour de France is equiped by cameras in either corner that can take thousands of images per second, as with motor cycling’s Grand Prix while each bike is equiped with a micro-chip, delivering instant results.