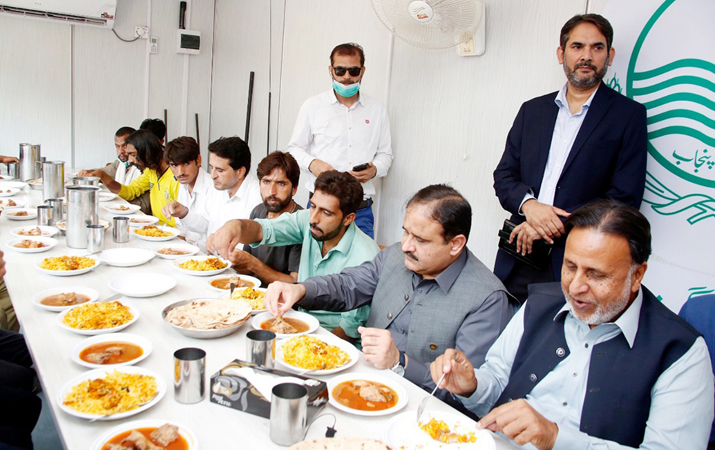 The CM extended good wishes to him and issued directions for further improving the law and order situation in the province. He directed that indiscriminate action be initiated against the criminals and no pressures should be accepted. The police will have to be transformed as a neutral entity in toto, he said. The supremacy of the merit and the law should be ensured at any cost and no pressure be tolerated for any wrongdoing, he stressed. The CM added that protection of life and property of the people is the prime responsibility of the police and it will have to work diligently for further improving the law & order. The police should actively redress the grievances of the common man in police stations and come up to the public expectations with regard to maintenance of peace in the society, he added.

Meanwhile, Chief Minister Usman Buzdar inaugurated an almonry in Shah Jamal here on Wednesday. He took food along with others. The CM announced to open 11 more almonries in Lahore adding that in-principle decision has been made to start almonries outside shelter homes for the hoi polloi. The government is fulfilling its responsibilities by providing boarding and lodging facilities to the impecunious strata, he stressed.

At least 48 thousand people have been provided food in 7 almonries in Lahore and the scope of this facility will be extended to other cities as well. Punjab Panagah Authority will be set up soon and the dream of a welfare state will be materialized, he announced. Looking after the needy is a great virtue but past governments never took any practical step for the welfare of the indigent strata. The hapless, abandoned and the poor need special attention of the society and the PTI government has taken care of the penurious stratum, he added.

Replying to the media, the CM stated the new IG police has been given instructions about law & order and supremacy of law will be fully ensured. IGs were transferred in the past too and it is not an unusual situation but an administrative matter. To another question, he replied that improvement will be introduced in the police soon.

The police were being provided with all kinds of facilities including the provision of executive allowance and procurement of 550 vehicles. Similarly, 45 new police stations have been constructed and land has been given for 101 other police stations. 10 thousand constables were also being recruited, he added. Replying to a new question, CM stated that no one should have any problem with anybody in the province. We will take every step according to the law and my doors are open to everybody and anyone can meet me. I also listen to the problems of elected representatives and solve them, he said. DC Lahore gave a briefing about the establishment of almonries.

The CM stated the development work of Allama Iqbal Industrial City will be accelerated and companies will be provided one-window facility as it is a flagship CPEC project. The government will solve investors’ problems on a priority basis as Punjab has been developed as the role model province with regard to investment and it is leading in ease of doing business, he added. Meanwhile, more development work will be done in TT Singh and special funds will be provided for public welfare, he added.

Mian Kashif apprised CM about development work and investment of foreign companies in AIIC. 40 big companies have purchased around 1500 acre land for setting up industries, he added.