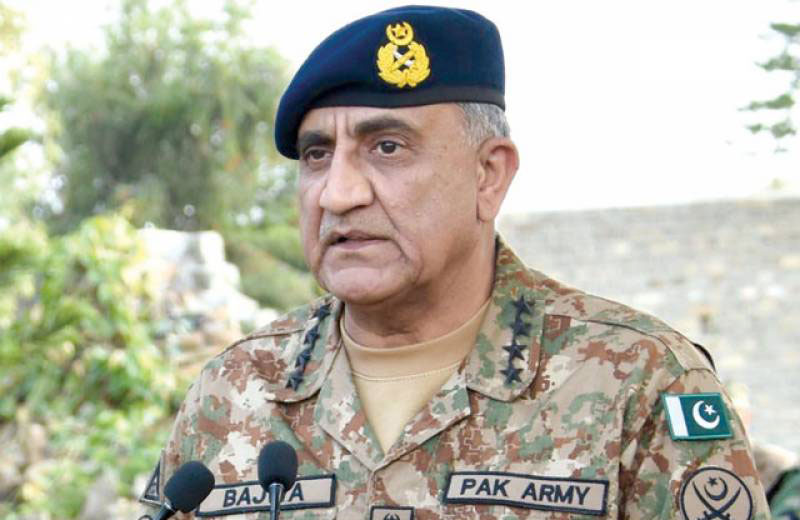 Chief of Army Staff (COAS) General Qamar Javed Bajwa Wednesday said that Pakistan’s vital interests must be safeguarded in synchronisation with government policies in the ongoing fifth generation and hybrid warfare being waged by anti-Pakistan elements.

Gen Bajwa passed these remarks while chairing the 235th Corps Commanders’ Conference at the General Headquarters (GHQ) in Rawalpindi, said a press release issued by the military’s media wing, the Inter-Services Public Relations (ISPR). “The 5th Generation Warfare and Hybrid application by anti-Pakistan elements against country’s vital interests must be safeguarded in synchronization with Government policies,” the COAS reiterated, according to the ISPR.

The army chief lauded operational readiness and sustained efforts of formations during internal security deployment in aid of civil power, particularly the efforts during Muharram and flood relief duties. He stressed upon the need to enhance combat readiness levels in the wake of evolving strategic and regional milieu.

The COAS appreciated high state of morale in the army and directed commanders to ensure welfare of troops during prolonged and extensive operational and IS deployments. The forum was briefed on evolving regional environment and operational developments, especially situation along LOC, Pakistan’s positive role and contributions in Afghanistan peace process, situation along Western Border including fencing progress and Operation Radd-ul-Fasaad, and Covid-19.

Locust control measures and support to national polio campaign also came under discussion. The forum expressed satisfaction over positive developments and indicators in all domains and improved security situation across the country. Increased ceasefire violations along LoC targeting civil population by Indian military and blatant human rights violations in Indian Illegally Occupied Jammu and Kashmir (IIOJK) were noted as major cause of concern for regional peace and stability. The forum extensively deliberated upon prevalent situation inside IIOJK and evolving situation in Afghanistan with impact on Pakistan’s security dynamics.

Separately, Pakistan Army shot down an Indian spy quadcopter on Wednesday after it intruded into Pakistan’s side of the Line of Control (LoC), according to the ISPR.

In a tweet, the ISPR pointed out that this was the 11th Indian spy quadcopter shot down by Pakistan Army this year. The military’s media wing said that the helicopter had intruded 500 meters inside Pakistan’s territory before it was shot down.

“#PakistanArmy troops shot down an Indian spying #quadcopter in Chakothi Sector along LOC. The quadcopter had intruded 500 meters on Pakistan’s side of the #LOC. This is 11th Indian quadcopter shot down by Pakistan Army this year,” tweeted the ISPR.