Keeping Up with the Kardashians then and now: How the famous family has transformed 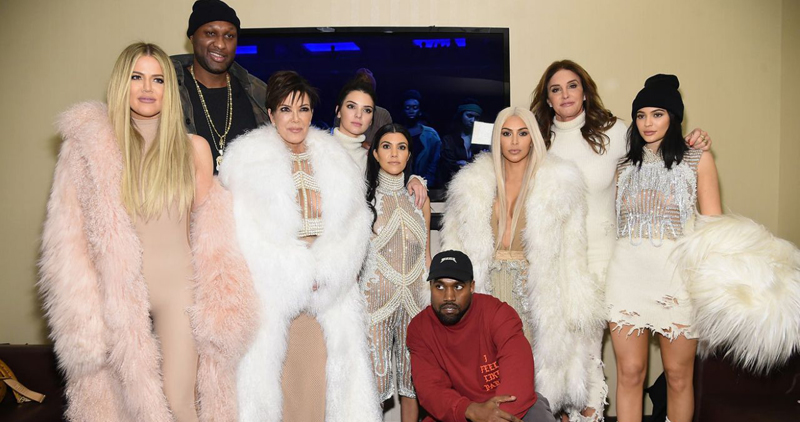 Fourteen years after Keeping Up with the Kardashians shrieked onto our screens (and made the family a surefire staple on all our social media), the family has announced that the 20th series of the once warts-‘n’-all reality series will be their last. While we can keep up with Kourtney, Kim and Khloe’s goings-on via their Instagram accounts, the inital few series of KUWTK shows the sisters in a simpler light long before they were all social media superstars.

The brainchild of momager Kris Jenner and Ryan Seacrest, who wanted to recreate the success of The Osbournes, Keeping Up With the Kardashians was initially panned by critics for lacking substance and peddling people who were famous for fame’s sake. However, the hijinks of the Hollywood Brady Bunch proved popular amongst audiences, launching the family into worldwide fame.

The matriarch and momager of the Kardashian klan makes major cash, as she is responsible for her children’s business endeavours.

As well as serving as executive producer on KUWTK and its numerous spin offs, Jenner, now 64, has also dabbled in her own media endeavours, including a stint on Dancing with the Stars in 2008 and her own short-lived chat show in 2013.

She also has released her autobiography in 2011 and a Kardashian-themed cookbook in 2014.

When the show began in 2007, Jenner has been married to athlete Caitlyn Jenner for sixteen years – the pair stayed married until 2014, when Kris filed for divorce. Caitlyn came out as a transgender woman a year later and underwent sex reassignment surgery in 2017.

Now dating Corey Gamble, Kris is thought to be worth $90million. You know what they say: the devil works hard but Kris Jenner works harder.

The eldest of the Kardashian kids, Kourtney’s relationship with former boyfriend Scott Disick was a heavy feature in KUWTK until their split in 2015. All three of her pregnancies have featured on the show, as have the resulting children, Mason, Penelope and Reign. Mason’s birth was even televised as part of the season 4 finale.

While close to her sisters, Kourtney has been on the receiving end of some of their biggest feuds, with one of the most savage putdowns aimed at her in 2018 when Kim described Kourtney as “the least interesting to look at.” A tearful Kourtney later told Khloe: “Honestly, it’s like, we have a disgusting family. I’m ashamed to be a part of [it]. It’s just gross.”

She took a backseat in the show in the 17th season, and then after a physical altercation with Kim, left KUWTK altogether.

“I won’t be live tweeting #KUWTK tonight, as I’m spending time with my kids while they are on spring break,” she wrote on Twitter about her decision. “I realise that a lot of the conversation right now surrounds my work ethic, and I feel like I need to just make one thing clear: raising children is a job as well.

“In fact, it’s the hardest and most rewarding job that I have ever had. I’ve decided to put my focus on my kids and my lifestyle brand, Poosh, which is all about finding YOUR healthy balance for living your best life.”

The face of the Kardashian family, Kim has come a long way in the past 13 years. After reclaiming the narrative surrounding her sex tape, she has since built herself an empire reportedly worth $350 million.

Kim has lived out hugely personal elements of her life in front of the cameras – with her grand wedding to second husband Kris Humphries (and divorce after 72 days) all seen on screens back in 2011.

While Kim made a name for herself before KUWTK as a personal stylist for celebrities, it didn’t stop her then-boyfriend Kanye West (who she later married in 2014) from famously ditching her old wardrobe for a new high-fashion look. She has since been on the front cover of Vogue, and the now infamous internet-breaking Paper magazine in 2014 (a far cry from just two years prior when she and her sisters launched a range with Dorothy Perkins). Since then, Kim has juggled a growing beauty empire, controversial lingerie collection Skims, best-selling mobile app Kim Kardashian: Hollywood and has made the selfie (and its offspring ‘the belfie’) a household term – all while being a mum of four.

While she took a brief break from the spotlight following the shocking news she was robbed at gunpoint while attending Paris Fashion Week in 2016, in more recent years Kim (now 39) has taken a more humanitarian route, getting involved in political campaigns and training to be a lawyer – which is even seen in her own show Kim Kardashian: The Justice Project. Not bad for a girl with no talent.

A firm fan favourite thanks to her hilarious personality, Khloe has also had more than her fair share of hardship over the past 18 series. While she seemed to have found ‘the One’ in Lamar Odom after a whirlwind romance in 2009, with the pair even landing their own spin-off show following their struggles to conceive, Khloe filed for divorce in 2013. The divorce was suspended briefly after basketball player Odom was found unconscious in a Nevada brothel in 2015, but they ultimately went their separate ways.

Khloe then dated fellow basketball player Tristan Thompson, who is the father of her daughter True. After weathering allegations of cheating (on Thompson’s part) throughout Khloe’s pregnancy in 2018, the pair split for good in 2019 after it was alleged Thompson had cheated on Khloe with younger sister Kylie’s friend Jordan Woods.

But aside from her heartbreak, Khloe is best known for her constantly changing image. Having been cruelly dubbed ‘the ugly Kardashian’ by rapper Eminem, Khloe has since in her own words “fallen in love with health and fitness”, posting regular updates on her diet and weight loss. Khloe’s body positive movement saw her launch her very own makeover show Revenge Body, and clothing brand Good American.

However, Khloe’s penchant for reinventing herself may have gone a step too far over lockdown, with many fans not even recognising the Kardashian in her latest Instagram pic.

The only Kardashian boy has a far lower profile than his sisters. Initially dating actor Adrienne Bailon when Keeping Up with the Kardashians started in 2007, the pair split in 2009. He then followed in his mother’s footsteps for a stint on Dancing with the Stars in 2011, coming second. After briefly dating Rita Ora in 2012 (which ended with a feisty Twitter status), Rob’s most high-profile romance to date was with Blac Chyna in 2016, which proved particularly controversial as she was the ex of Kylie Jenner’s rapper beau Tyga. Their whirlwind romance saw the pair engaged in April of the same year, and Blac was expecting their first child in May. Their daughter Dream was born in November.

The pair’s volatile relationship was the subject of reality series Rob and Chyna, which followed the pair as they prepared for parenthood. They split for good in 2017 after Rob accused her of cheating of him, posting a series of explicit pictures online.

Elsewhere, Rob has also designed a range of socks.

Having been signed as a model at 14, Kendall has regularly modelled for brands such as Victoria’s Secret, H&M, Balmain and Chanel amongst others.

While she was named by Forbes as the world’s highest paid model of 2018, Kendall’s kareer hasn’t been without its kontroversy. Having been embroiled into promoting the famously-failed Fyre Festival in 2017 (she had to pay out $90,000 earlier this year for her involvement) Kendall’s almost career-ending gaffe came in April 2017 when she was the face of the poorly thought out Pepsi campaign, which borrowed imagery from the Black Lives Matter movement and seemed to trivialise police brutality against black Americans.

Kendall is far more private about her dating life, but has previously been linked to Harry Styles, Anwar Hadid and A$AP Rocky.

The youngest in the Kardashian klan hasn’t been without her own drama in the last 18 series. The baby of the family has grown up in the spotlight, reportedly starting to get lip injections in 2014.

While she kept her lips ironically zipped over the cosmetic procedure until she was ready, Kylie launched her own cosmetics line called Kylie Lip Kits, which was renamed to Kylie Cosmetics the following year. The range, which has branched out into skincare, is what saw Kylie controversially being named the youngest self-made billionaire by Forbes in 2019 (though a recent row saw this status revoked).

Kylie faced her own controversy when it was reported she was dating rapper Tyga in 2014 when she was just 17. The pair confirmed their relationship with Kylie was 18, and split in 2017.

When the star started dating rapper Travis Scott later in the year, it was rumoured that Kylie was pregnant. While Kylie never confirmed the pregnancy and took a step out of the public eye, she later confirmed she had given birth to Stormi Webster on 1st February 2018.

While it has been reported her and Travis have reconciled their differences and got back together, she was rumoured to have briefly dated Drake.