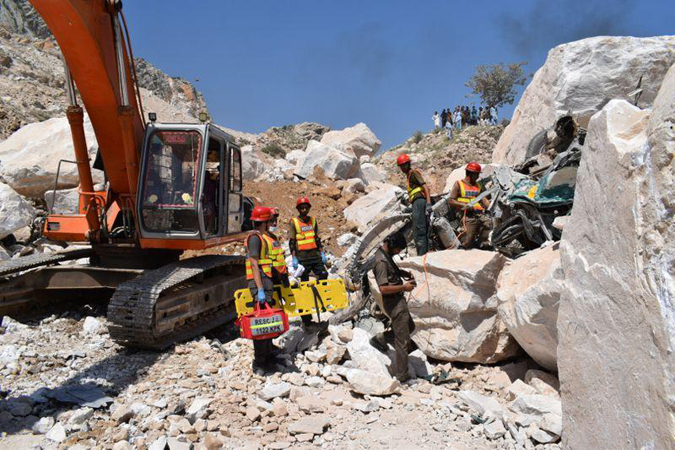 The death toll from the tragic incident of a rockslide in Khyber Pakhtunkhwa’s Mohmand district reached 22 after more bodies were retrieved from under the rubble on Tuesday, a private TV channel reported.

According to the TV report, nine bodies of the labourers working at the marble mine in KP’s remote area have so far been pulled out during the rescue operation which restarted earlier in the day.

District Police Officer Mohmand Tariq Habib said that at least 11 more people are feared trapped under the debris, adding that rescue operation has been started after it was stopped due to darkness at around 2am. Heavy machinery and manpower were dispatched to the area for assistance in the rescue operation.

On Monday, six mines at the Ziarat Ghar mountain had collapsed killing 12 miners and injuring several others. Deputy Commissioner Iftikhar Alam had said that he feared the number of casualties from the mine collapse would rise. The Provincial Disaster Management Authority (PDMA) had been asked to provide heavy machinery for rescue operations.

The quarry is located in the Ziarat area of Mohmand, along the border with Afghanistan. The area is known for its high quality white marble, both sold in Pakistan and exported to other countries. Between 40 and 50 people were at the site at the time of the collapse which occurred Monday evening, Tariq Habib, district police chief of Mohmand district said. “Usually a large number of people work in these marble mines but luckily a majority had finished work and returned home,” he said.

Nine people were injured. The number of fatalities was unclear because some families took bodies of loved ones directly to their homes from the site, said Sameen Shinwari, a doctor at the Ghalanai District Headquarters Hospital. Cellular signals and other communication facilities are unreliable in large parts of Mohmand district, including the area where the quarry is located.