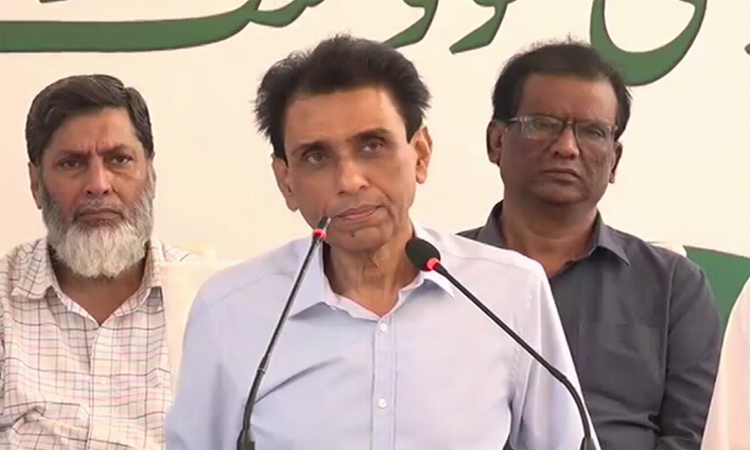 Muttahida Qaumi Movement-Pakistan (MQM-P) Convener Dr Khalid Maqbool Siddiqui on Tuesday lashed out at the Sindh government for appointing ‘non-local officers’ as administrators in cities across the province.

Addressing a press conference in Karachi, he began by saying that the party had certain ‘concerns’. “Having concerns is not a sin because things have been announced on multiple occasions but nothing has ever happened.” He added that the party would not comment on the funds allocated for the metropolis under the Karachi Transformation Plan, a financial package worth Rs1.1 trillion. “Some people are conducting a post-mortem of what is being given. We don’t want to do that,” he said in an apparent reference to the PPP. “Karachi’s development is inextricably linked with the country’s development but our concerns manifested into a reality when the city’s administrator was appointed,” he said.

On Saturday, the provincial government had appointed senior bureaucrat and former commissioner of Karachi Iftikhar Shallwani as the city’s administrator. Sindh Governor Imran Ismail on Monday stated that Shallwani’s appointment was a consensus decision of “all stakeholders”. However, the MQM-P, a key partner of the PTI in the centre and one of the main political players in Karachi, had called the move an injustice and discrimination on ethnic grounds.

“The MQM-P strongly condemns the decision to appoint non-resident officers as administrators in the cities of Sindh, including Karachi,” the coordination committee of the party had said in a statement.

“What was our demand? Our demand was that the city’s administrator should be a person living in Karachi, someone who is able to understand the woes of the people. Someone who is not politically affiliated with anyone,” said Maqbool during the press conference. “We had the same demand for Hyderabad, Larkana and Sukkur. This is the way to do things in a civilised society. When we expressed our concerns, we were told that it was not appropriate to appoint a separate administrator and that is why the deputy commissioners were given this responsibility. If that’s the case, then why wasn’t the Karachi commissioner given this responsibility?” he asked.

Turning his criticism towards the federal government, he said he was stumped as to why it allowed future development work to be carried out by a “bureaucrat” of the PPP government. “If you wanted to put Rs1.1 trillion towards the city’s development then you should have done so through those who know Karachi.”

He said that the appointment of the District East administrator was also raising questions. “People say he is under investigation by the National Accountability Bureau for being involved in two projects in District East with Anwar Majeed [Omni Group chairman],” he said. You deemed such individuals capable but you don’t think Pakhtuns, Punjabis or Urdu speaking are capable, he said.

He said that the party was receiving calls from across the province from concerned citizens, questioning how long the MQM-P would watch the “drama” unfolding. “Why are people of a certain ethnicity being preferred as administrators in the province’s cities?”

Commenting on the Karachi Transformation Plan, he stated that the city generates a yearly revenue of Rs3 trillion. “In three years, this city will have given Rs9 trillion when and if Rs1.1 trillion are spent under the development package.”

He added that the Centre had fulfilled its end of the bargain when it came to certain development projects, but the provincial government had failed. “Won’t we have concerns? They ask us to believe, but we have concerns.

“And after the appointment of these administrators, no one will be able to stop our concerns from changing into a reality.

“These concerns will exist until those who can relate to the pain and suffering of this city, with credibility and a spotless past [are appointed].” He added that if the party is forced to come onto the roads, it would do so.

Maqbool also lashed out at the federal government for not being stern enough with the provincial government. “They will be absolved of all of their sins, but we are questioned over a few comments,” he said, adding that nobody was concerned about their criminal past.