Educational institutions to reopen from September 15

* All universities, colleges and grade IX and X classes to commence from 15th
* Students of sixth, seventh and eighth classes will be allowed to attend schools on 23rd
* Classes from one to five will restart on September 30 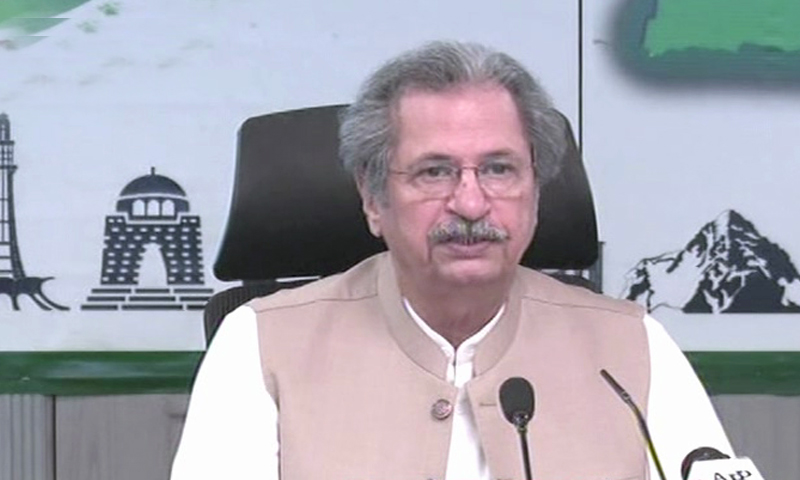 As Covid-19 cases are on a continuous decline in the country, the government on Monday announced reopening of educational institutions across the country in phases starting September 15.

The announcement was made at a press conference by Federal Education Minister Shafqat Mahmood along with Special Assistant to Prime Minister Dr Faisal Sultan.

The education minister said that the National Command and Operation Centre (NCOC) worked hard and consulted with members of think tanks and specialists and kept reviewing the situation in the region. “All universities, Higher Education Commission’s (HEC) institutes and colleges will reopen from September 15,” he said, adding that the government has allowed for classes of grades IX, X and XI to commence from September 15.

In the second phase, after reviewing the pandemic situation for one week, he said, the students of sixth, seventh and eighth classes would be allowed to attend their schools on September 23, while primary classes (one to five) would restart on September 30. “It was really a difficult and tough decision to reopen the educational institutions,” he said, adding that constant monitoring of the first phase would be carried out before commencing of the second and third ones.

The minister said the decision was taken after thoroughly analyzing regional and global trends of the outbreak, holding extensive consultations by the ministries of Education and Professional Training, and National Health Services, Regulations and Coordination with the federating units, coupled with research by the NCOC.

He clarified that the decision would be applicable on all the educational institutions of both public and private sectors, besides vocational centers and religious seminaries, which will enable millions of students to resume studies after a hiatus of around six months.

Shafqat Mahmood said the government had to take difficult decisions during the lockdown period, which included the promotion of around four million students of the higher secondary education to their next classes. Expressing his gratitude to the parents of students for showing perseverance during the difficult times, he urged the teachers and school administration to fully cooperate with the government and ensure compliance of the anti-Covid SOPs at their insinuations. He warned the school administrations of strict actions in case of non-compliance. He also lauded the efforts of NCOC for making the decision possible.

SAPM Dr Faisal Sultan said the government would ensure implementation of health screening, Covid-19 surveillance, sentinel testing and continuous monitoring in educational institutions after their reopening. He said the main objective of regular sentinel testing was to monitor the corona situation and examine the health of teachers and children at schools after every two weeks. He said further decisions would be made on reviewing the situation on the basis of test reports on scientific means. The schools would be reopened stage-wise with strict monitoring on the SOPs implementation.

He made it clear that all the schools would have to strictly follow the SOPs announced by the government like social distancing, hand sanitizing or washing, wearing of face mask etc. He added that besides schools’ administration, the role of parents was also crucial to ensure implementation of the SOPs. “Schools administration, teachers and parents will have to adhere to the instructions after reopening of the institutions,” he added.

He said the number of students in a class would be reduced. Half of the students would attend the class on one day and the rest next day to avoid spread of the disease. He said there was no need to purchase expensive masks for children and suggested the parents to make home-made fabric mask for school going children, which are washable and reusable. The students with low immunity level should be avoided to attend schools in the first phase.

He said due to immediate closure of schools, a large number of population, particularly the students were now safe and remained protected from the Covid-19. The government had adopted an effective strategy to combat the contagion that resulted reduction in corona cases in the country, he added.

Expressing satisfaction over the current Covid-19 situation, he said it all was made possible due to team efforts and the efficient work of all departments and organizations concerned.