In Pennsylvania, a Trump-Biden battle on uneven ground 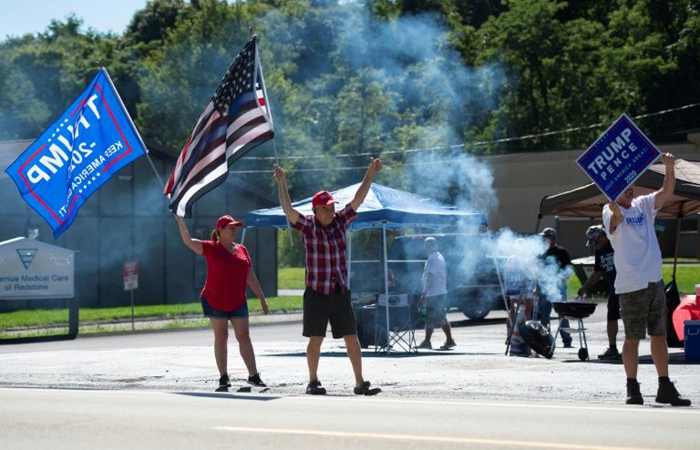 Door-to-door canvassing and weekly rallies for Donald Trump, while Joe Biden’s campaign avoids both due to the coronavirus: Democrats in Pennsylvania’s rural counties are battling to win back the key electoral state, but the pandemic is not making it easy.

The difference between the Republican and Democratic efforts in Pennsylvania’s Washington County, in the distant suburbs of Pittsburgh, is stark this election season: three tents welcomed the president’s supporters this weekend, as team Biden tried to stick to public health guidelines by organizing primarily online.

Trump backers without anti-virus masks, arrived by the dozens to pick up yard signs and T-shirts emblazoned with the slogan “Make America Great Again” in an atmosphere akin to a family reunion.

A day prior, state representative Tim O’Neal had walked along the county’s hills to rally Republican supporters, saying he has knocked on 3,500 doors since late June.

But on the Democratic side, “we are not canvassing door-to-door,” says Christina Proctor, the local Democratic party’s vice chair. “We don’t want to put our volunteers at risk.”

“I am frustrated with that, I do feel they (Trump’s campaign) are creating some enthusiasm with their events and they are still knocking doors and because we are taking the pandemic so seriously, we are not doing that — I am concerned that that will put us at a disadvantage,” she said just two months out from the November 3 vote.

The local Biden campaign team, wearing face masks, hands out its yard signs from its office.

Republican county official Dave Ball said that caution won’t do much to counter the lack of enthusiasm for Biden, who already faced a tough battle locally due to his environmental stance.

Ball said 2016 Democratic candidate Hillary Clinton hit a nail into her electoral coffin when she advocated to close coal mines.

2020’s version could be shale gas fracking, an industry that in recent years has become key to the region, with tens of thousands of jobs directly or indirectly linked.

The Pennsylvania-born Biden has previously said he would block the issuing of new permits on public land, but stated just last week he would not ban shale gas fracking, despite his emphasis on moving away from fossil fuels in order to battle climate change.

But according to Republican Ball, that pledge may not carry much weight locally: “those words came out of his mouth… but I don’t believe that he is committed to it,” he said, pointing to a number of prominent Democratic figures who denounce fracking and the fossil fuel industry.

A few figures might justify his confidence. In this county that stood solidly Democratic before swinging for Trump in 2016, the gap between registered Democrats and Republicans is narrowing.

The year Trump was elected, there were more than 14,000 registered Democrats than Republicans, says Ball.

Today that margin has shrunk to 2,000 in favor of the Democrats.

At a rally this weekend, at least one former Democrat registered for the rival party for the first time.

“I haven’t voted for years,” said Martin Angelo, a 64-year-old retired miner. “Trump made me want to vote again.”