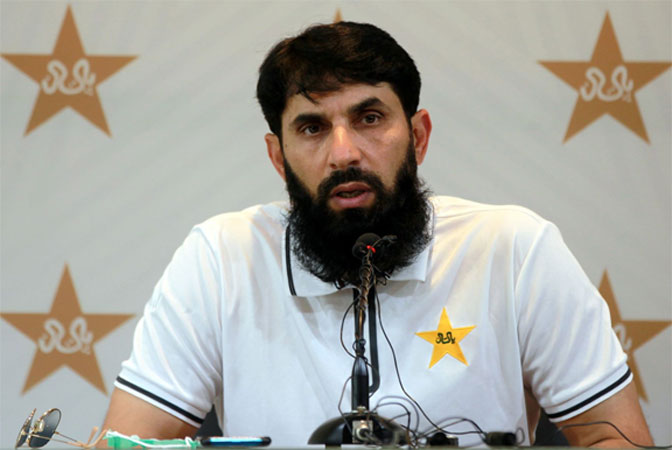 LAHORE: Pakistan’s head coach-cum-chief selector Misbahul Haq is disappointed with the results on the Men in Green’s tour of England. While speaking in a press conference at the Gaddafi Stadium Lahore here Monday, Misbah, giving lame excuses, said that Pakistan had the chance to win, both, the Test and T20I series against England. Pakistan played three Tests and as many Twenty20 internationals in empty stadiums. Their performance remained below par and they struggled with both batting and bowling in Tests particularly. During the trip, the squad spent two months in a bio-secure environment after several players tested positive for Covid-19 before the trip. “This was a very important tour for us, and world cricket, bearing in mind Covid-19 situation,” said Misbah. “Players went for the tour without any preparation but the way they played cricket and showed discipline should be appreciated. Obviously my biggest regret is in terms of results as we could have won the Test series 1-0 and T20I 2-0. We made some technical and tactical mistakes, which did not help our cause,” he added.

He also lamented the team’s inexperienced bowling department and stressed on the importance of being patient, with regards to their development. “Our bowling is inexperienced at the moment. We need to be patient and give these bowlers time to develop before reaching any conclusion,” he said. “They panicked a bit in the first Test and the second T20I but after they have more experience under their belt, such a thing will not happen.”

To a question, he said that the Pakistan cricket team’s slip from the number one spot to number four in the T20 rankings was a consequence of a string of failures long before he took the charge. “Of course, the team was number one but if you recall, when I came even then the team was on a losing streak. The team had already lost in South Africa, England and other places. The slide had already begun and everyone knows why that was.

Despite Pakistan’s not being able to string consistent performance during Misbah’s tenure, the former Pakistan captain believes that the team is on the right track. “I’m satisfied with the process. We are on the right track despite the results not going our way,” he said. “I’m confident that things will improve in the future.” He also responded to question over Pakistan’s limited-overs captain’s, Babar Azam, decision-making skills on the field. “Babar makes his own decisions as we believe in empowering him as captain. He will make mistakes but will also learn from it and improve along the way.”

Misbah urged more nations to tour the country, saying the sport needs “mutual support” to recover from the coronavirus crisis. His appeal comes just a week after Pakistan finished a tour of England. Even before the pandemic, Pakistan was trying to attract touring teams after militants attacked Sri Lanka’s team bus in Lahore in 2009. Security has improved, however, and last year Pakistan squared off against Sri Lanka in what was its first home Test in a decade. Misbah said he hoped teams such as England would consider travelling to Pakistan as global sport slowly returns following months of inactivity. “Our tour to England was important for both countries. It was also important to support the cricket world in general and English cricket in particular in these testing times of Covid-19. Pakistan also deserves similar support from other countries. These are times when the cricket world needs mutual support.” Last week, England and Wales Cricket Board chairman Ian Watmore said England should “definitely” tour Pakistan provided it was safe to do so.