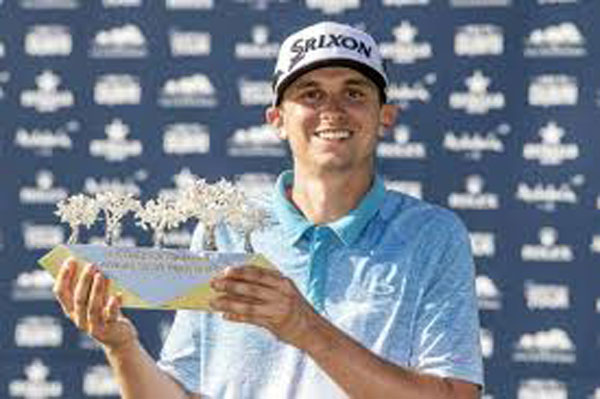 ANDALUCIA: American John Catlin won his maiden European Tour title at the Andalucia Masters on Sunday, holding off former world number one Martin Kaymer in a thrilling battle that went down to the final hole. Catlin, 29, failed to score a birdie in windy conditions on the final day at Real Club Valderrama but produced some brilliant par saves in his closing round of four-over-par 75 and finished two-over for the tournament. Germany’s Kaymer, chasing his first victory in over six years, missed out on a playoff when his chip for par from just off the 18th green stopped short of the hole as he finished one stroke behind in second place. Catlin, who has lifted four titles on the Asian Tour, said past experience served him well as became the first wire-to-wire champion at the Spanish event. “I knew I had done it before,” Catlin said. “Even when things were not quite going my way in the early part of that back nine, I knew if I just stayed patient and kept going I would give myself a chance. “That was one of my goals in 2019 when I earned my card, to win on the European Tour, and I wasn’t able to win in 2019 so it’s very nice to get it done this week and especially on a beautiful golf course, and very demanding one.” South African Justin Harding finished tied-third at four-over alongside France’s Antoine Rozner and Dutchman Wil Besseling.